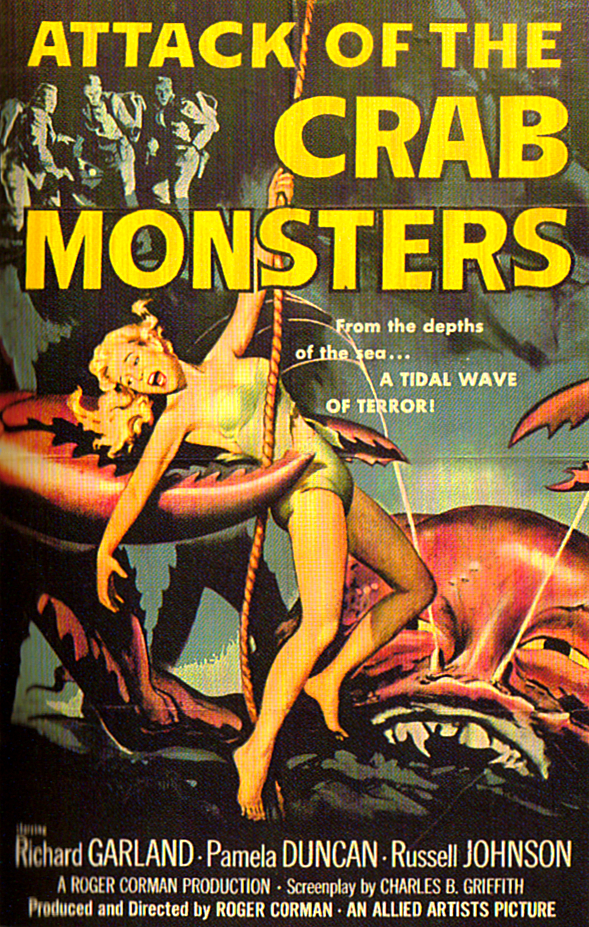 I am not a cultist.

I never belonged to the faddist cult of laughing at grade B films from the 1950s (and early 1960s).

WHY? Because I enjoyed them when I first saw them, took them seriously. They were awesome. My sense of wonder was fully activated. Besides, sometimes they were scary.

For example, I was terrified by the moth-eaten polar bear attack in Santa Claus Conquers the Martians (1964). This is distinctly odd, since I was thirteen years old at the time, but then I have a bit of a phobia about bears so maybe it’s not completely irrational… well, maybe it is. That’s the point.

Anyway, the films in question were first shown as double bills in theatres and proved reasonably popular, especially with teenagers. In fact, most of them were specifically targeted at teenagers, then a newly revealed pockets-full-of-cash customer niche. I first saw these films either as triple bills in third-run theatres, or on TV in the Shock Theatre era when networks woke up to the profit potentiality of cheap SF & horror films. This was the heyday of TV horror hosts.

Then television switched to colour broadcasting and as a result obscure B&W films (of all genres) disappeared from the screen and popular memory for a good twenty years or so.

Along came video tapes for home viewing. Incredibly expensive at first. I remember paying a small fortune to rent a video camera to film Expo 86 World’s Fair in Vancouver, and another fortune to buy a video machine so I could watch what I filmed. Felt a bit foolish. So few movies available to rent. Not worth the money I shelled out.

The video industry was a bit clueless at the time. I remember walking into the first video store to open in Vancouver and asking to purchase the original King Kong.

“Buy a film? Who’d want to buy a film? Nobody going to watch a film more than once. We’re in business to make money. We only rent. We’d be crazy to sell films. No way.”

In this era of Netflix and on demand, owning a collection seems a bit silly. Back then though, the video industry was missing a bet.

However, once the price of video tapes came down and public demand shot up, the video trade caught on quickly. There was money to be made renting and selling. Anything and everything guaranteed to vacuum up cash. Movie vaults ransacked. Public domain films especially sought after. Sheer profit.

As a consequence old B&W B’s were rediscovered by the public, and because the special effects were so feeble (in comparison to contemporary films), and their 1950s attitudes now risible, people found these old B movies even more entertaining than their first generation audience had.

The cult of the Cult Film arose. Films so stupid it is hard to conceive how anyone could conceive of creating them.

Yet, I insist, they have value. They are old fashioned morality plays where everyman-heroes fight monsters, where politicians are sincerely incompetent rather than cynically manipulative, and where the mere concept of violence (rather than gory depiction) suffices to portray malevolent menace. Drama in purest form, not gussied up with sadism and inevitable defeat like many a modern film.

Crap, you say. Crap films. Technically, yes. But only if you cling to standards. Anyone foolish enough to insist on high standards in movies is doomed to conclude that no film and no director is any damn good at all and film watching is inevitably nothing but disappointment and disillusionment. Where’s the fun in that? No fun. None.

You need to take the following to heart:

2)- Since you’re going to spend more than an hour of your life watching the film, why not accept its ridiculous premise? Meet it halfway?

3)- Think like a ten year old. Pretend it’s real. Submerge yourself in the film, be absorbed by it, be a part of it.

4)- Above all, lower your expectations as low as possible.

Accomplish the above and the result will be truly wonderamic the thrill of a lifetime. I promise. 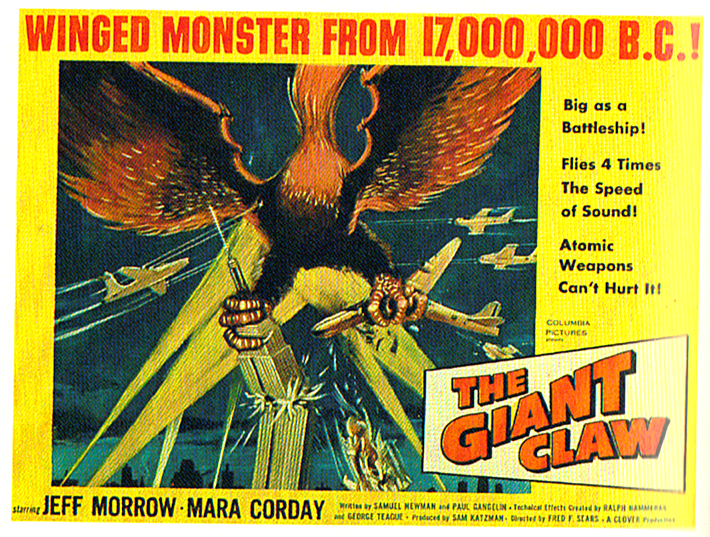 When asked why she made it, Producer/Director Doris Wishman replied “Because I didn’t have enough money to make a real movie.”

Two guys build a spaceship and fly to the moon where they discover a nudist colony living in a castle made of coral. You can tell the Moon People are aliens because they wear deely-boppers and communicate telepathically (saves costs of lip-synching). Since everyone wears underwear the aliens aren’t really nudists, despite the women being bare-breasted (men too, but big deal…).

Naturally the two intrepid astronauts, in dime-store garb, wander slowly about staring and taking pictures, much like the cretins back on Earth attending “Live Models!” photo sessions. Very realistic. Documentary-like.

I was pretty sure before I saw this that films are supposed to have a plot. Apparently I was wrong.

Somebody rapes somebody. Then somebody else (or maybe the same somebody) is chased by foreign agents into the Yucca Flats (a section of desert on an atomic bomb range). Surprise! A bomb goes off. Said somebody is exposed to the blast. This initiates mutation.

The somebody (supposedly a brilliant scientist) does not grow bigger as you might expect. Nope. Played by the mighty Tor Johnson, he’s already colossal to begin with. He just turns into a moron who wanders the desert interminably. Assorted people halfheartedly search for him. Occasionally, in a stunning plot reversal, he searches for his searchers, typically in a lumbering attack which is a sight to behold, especially when seen staggering uphill in defiance of gravity and imminent thrombosis. A desert hare provides pathos.

A contemplative film, one that surpasses understanding, I strongly suspect Jean Paul Sartre wrote the screenplay.

Film students take note! You don’t have to be Ed Wood Jr. to make a movie. You can be something less.

According to my memory (of a source I can’t remember), the guy who wrote/produced/directed this film was a bit of an operator who talked a small town into funding the film and providing the cast, amateurs one and all. At first filming went well, but then the auteur behind it disappeared, allegedly pursued by creditors, never to be seen again.

Eventually the frustrated investors hired professionals to edit the mess into something approaching a film (they failed). Since none of the sound recordings could be found, excruciatingly dull narration was substituted.

The monster, on the other hand, is a hoot. Your basic ambulatory carpet (with five men underneath) slowly gliding over victims paralyzed with fear. Had the prey been motivated to saunter away in terror they would have escaped. Three m.p.h. would have sufficed.

The great delight of the film? These aren’t actors. They’re real people! Watch them. Could you have done better?

Living in a laboratory (just a crummy cabin) on an island, a mad scientist creates a herd of 100 LB Killer Shrews who eat three times their own weight every day. This greatly inconveniences the islanders, who must endure a shrew siege. On the plus side, the shrews shriek delightfully.

This low budget film (aren’t they all) is extremely claustrophobic, taking place almost entirely within the cabin which, it turns out, isn’t much of a refuge as the shrews with their gigantic fangs can gnaw their way in whenever it suits them. Everyone is understandably nervous. Everyone feels trapped, doomed. Jokes fall flat. There’s no escape, no way out.

Very much a parable of these modern, uncertain economic times, methinks. Prescient.

Giant, telepathic crabs (who absorb the minds of anyone they consume) employ dynamite to sink an island beneath the waves one explosion at a time. Just a typical day at the beach.

This may surprise you but Director Roger Corman has always believed that the main problem with genre movies is too much characterization. Shock value trumps character development. In this film he set out to prove his point, instructing script writer Chuck Griffith:

“I don’t want any scene that doesn’t either end with a shock or the suspicion that a shocking event is about to take place.”

The film is creepily apprehensive. Scared the hell out of me when I was a kid. Corman was right. Characterization weighs a film down. Get rid of it, I say! He did. 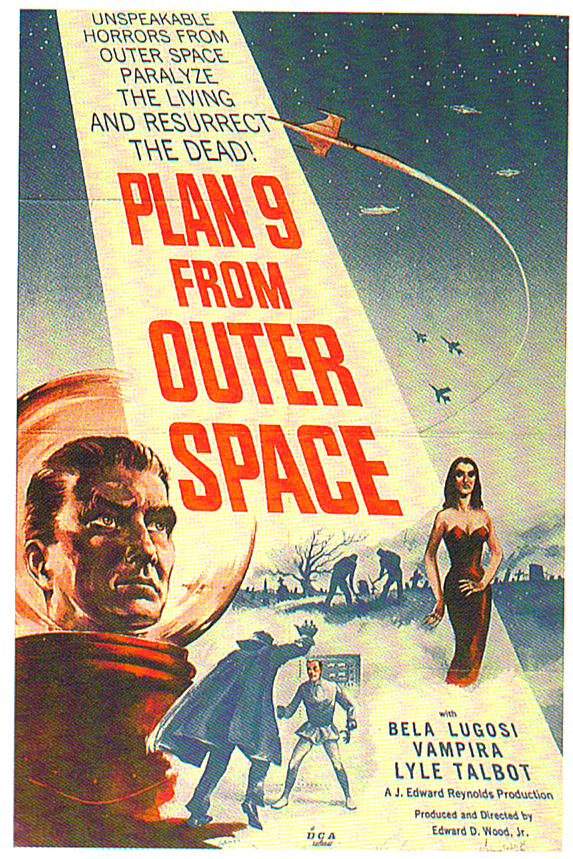 LA County Arboretum doubles as Florida swamp inhabited by man-sized leeches. By far the greatest fun in this film derives from the love triangle between woman-wronged Dave, his steamy slut of a wife Liz, and incredibly boring game warden Steve.

I bet playwright Tennessee Williams liked this movie. I had lunch with him once (long story). Wanted to ask if he felt the film was inspired by his plays, or if his plays were inspired by the film. Didn’t dare. No guts. Missed opportunity.

There’s a crying need to convert the script into a stage production. Tennessee would have been perfect for the task.

For additional fun, count how many times the heroine serves coffee.

Directed, produced, written, edited, and filmed by Tom Graeff (who plays Joe the reporter), it feature’s self-conscious acting on a par with the worst of high school productions (which it greatly resembles). Space teenagers arrive on earth to turn it into a grazing ground for giant Gargons (lobsters), but Space-Twit Derek ruins all by falling in love with an Earth girl. Absolutely ridden, not to say sodden, with teenage angst.

A god-send for non-talent ambition, this film proves anybody can make a movie. Absolutely anybody.

Watch it and be inspired! Could change your life… one way or another…

A giant bird arrives from space, eats trains, planes, skyscrapers and teenagers. Awesomely inept special effects defeat reasonable acting and adequate script, but adds immeasurably to entertainment value. Most exhilarating of all, the Giant Claw is the most stupid looking monster ever conceived. I can’t praise this film enough.

I defy anyone to watch this film and not have a jolly good time.

Read my February 14th column for an in-depth analysis. Any film with a hairy robot is well worth watching. Static, full of non-action, talky, but endearing. Director Phil Tucker allegedly attempted (and failed) to commit suicide after the initial reviews, which is sad (sad that he attempted, not sad that he failed, just to be clear), because few films are as charmingly silly and memorable as Robot Monster. It’s a classic. My personal favourite in fact. However…

Has got to be the most accessible of these fllms. Its utter sincerity and enthusiasm override all objections to its surreal dialogue, amateurish sets and peculiar direction. If ever a man dreamed of being an auteur, it was Ed Wood Jr. And if ever a man succeeded, it was Eddie. The film is entirely his from start to finish. A triumph.

Not a triumph of film making, mind. A triumph for Ed Wood Jr. No question about that.

I’ve not told you anything about it in order to maximize your pleasure on confronting it for the first time. You can thank me after viewing it.

Trust me. It’s the best of the worst. Absolutely.