Reasons why you should read What Mad World by Fredric Brown, if you haven’t already. 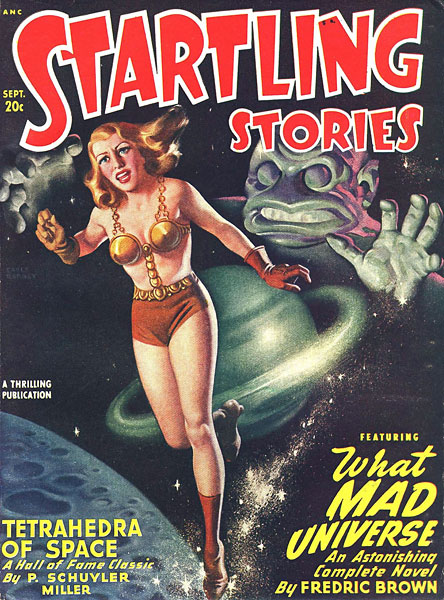 There was a time when What Mad Universe, Fredric Brown’s satiric SF parody, was considered one of the best novels in the field. But it has been a long time since it was first published in Startling Stories in 1948 and there appears to be a sizable, or at least vocal, portion of the SF community wishing to distance themselves from the pulp roots of the genre. Whatever the reason, What Mad Universe seems to have become a forgotten classic. There is no denying the novel’s pulpy feel. It is, after all, a parody of many of the clichés of pulp era SF. But it is also a well-crafted story of a man stuck in an alternate universe, and a story you will likely be glad you took the time to read.

Keith Winton, editor of SF pulp magazine Surprising Stories, is getting ready to watch the first rocket to the moon make impact. The rocket is equipped with a potentiometer designed to release a massive electrical discharge when it hits the moon, making the impact visible back on earth. But the rocket doesn’t reach the moon, instead it crashes a few yards from where Keith is sitting. The electrical discharge sends him into an alternate universe that in some ways is nearly identical to his own, complete with familiar people and places. In other ways, however, this universe resembles one that would come out of the minds of the SF fans who send letters to his magazine every month. Space travel is commonplace and BEMs (bug-eyed monsters) are a reality. Seven foot tall, hairy, purple, moon monsters walk the streets of New York as if this were a normal everyday event. Government agents shoot suspected Arcturian spies on sight. And of course, space girls wear skimpy outfits, even when working at the office.

Keith quickly finds himself suspected of being an Arcturian spy and must struggle to survive this mad universe. Staying alive, however, is not his only problem. The girl he was just starting to date back in his universe is engaged to another guy here. And not just any other guy, but a hero of impossible proportions–genius, inventor, commander of the space fleet and all-around handsome good guy. Then there is the little problem of figuring out what is real and how to get back to his “sane world in which there’d been two world wars but not interplanetary ones.”

There are several things that make What Mad Universe a laudable novel. First off, the story is highly entertaining. So unless you are one of those literary masochists that dismiss fun as a valuable attribute in a novel, you will want to read this because it is an exceptionally fun read. Brown skillfully manages to keep the plot tight and logical, while at the same time operating in a universe that seems improbably absurd. His handling of alternate universe concepts in this story influenced many other authors including Philip K. Dick. And although Brown was well known in SF circles, he was more famous for his detective novels. His skill in that genre can be seen in the atmospheric night scenes involving gangs and the criminal element.

As befitting a classic, What Mad Universe has seen a fair number of printings and editions, though most can only be found in used form now. It is worth seeking out a copy that includes William Tenn’s 1978 introduction. I recommend NESFA’s omnibus, Martians and Madness, which includes not only Tenn’s intro, but also all five of Brown’s SF novels. It is readily available new, and to the best of my knowledge, may be the only edition of What Mad Universe still in print.