Regardless of the fact that I grew up with a mother who was heavily interested in art and art history, it was my preteen obsession with anime that first prompted me to try drawing seriously.  On one fateful day approximately twelve years ago, I picked up a mechanical pencil and drew my first fanart in a lined journal with yellow pages – Quatre Winner from Gundam Wing, if memory serves.  And though I’ve since taken drawing classes and can render more refined drawings than my original rigid and clunky pieces, I will always credit the world of animanga for giving me an outlet and a passion.

I have a ton of personal art projects floating around, both in my head and on paper, and I’ve been feeling a little daunted and unmotivated.  It was with great hope for inspiration that I picked up 1000 Ideas By 100 Manga Artists, edited and compiled by Cristian Campos.  I think I expected it to be a thousand little art prompts or bits of inspirational phrases; what I got was actually so much better. 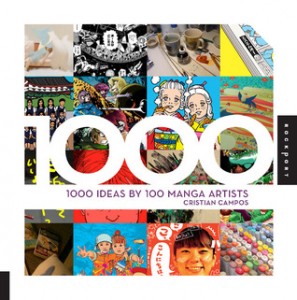 Campos drafted a list of twenty questions which he distributed to 100 self-titled manga artists – both from Japan and those in the West who are heavily influenced by manga.  The questions ranged from simple things like “What does your work desk look like?” and “What do you do before you sit down to draw for the day?” all the way to big questions like, “Is manga art?” and “What makes manga so different from American and European comics?”  The artists got to choose ten of those questions to answer, and were asked to send along ten illustrations that helped to expand on those answers.  Campos says in the introduction that, “…all the books on manga treat manga as a ‘genre.’  We, however, have treated it like a ‘philosophy.'”  And it’s true – no two artists answered the provided questions in exactly the same way, and all of them helped to build upon the idea of what manga is, and what it has the potential to be.

There are no huge-name mangaka here, and though I vaguely recognized a name or two, I was actually quite pleased to be exposed to a great range of artists, experienced, inexperienced, and everything in between.  The most interesting thing that I noticed was the difference between the Japanese and Western artists – not just in their answers (many of the Japanese answers were shorter and more open to interpretation), but also in the artistic range.  The majority of the Western artists, which tended to be from European countries, had a very typical-manga-meets-Western-comic-style, complete with cel-style shading and vibrant candy colors.  There was some of that among the Japanese artists, but there was also a good deal of very atmospheric works (there were a couple textile designers!), lots of pale watercolors, and sketchy, almost childish figures (rendered very obviously with a trained artist’s hand).  It was a beautiful example of how not all manga, or manga-inspired work, is created equal.

Another aspect that I found encouraging was how many of these artists use almost strictly traditional materials.  There is a large trend toward using digital means for creating artwork, and I think that’s generally a good thing.  But as someone who has very little interest or patience when it comes to tablet-rendered artwork, I often feel like an outcast in the overall comic art community.  And while I have resolved to become better-versed with Photoshop and my now-ancient tablet, I’m proud (and honestly relieved) that I don’t have to justify not using them as well.

So, 1000 Ideas By 100 Manga Artists is absolutely not a how-to book, an instructional book, or a comprehensive study of manga as a cultural phenomenon.  What it is, is an awesome introduction to deserving artists that are under the popular radar for the most part, as well as a great example of how diverse a group of people can be while all drawing influence from the same thing.  And while it turned out to be something very different from what I expected, it wasn’t any less useful in providing me with adequate inspiration and a few rather philosophical artistic questions to mull over.