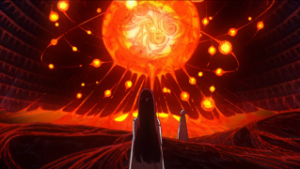 New quick summary: Our clothes are actually alien parasites which are biding their time until the day that they will awake and consume us all.

One wonders what the Kiryūin clan has been promised for their help. World domination won’t mean much if there’s no one left to dominate. Maybe transportation to the next planet? Absorption into the controlling Life Fiber consciousness? Whatever it is, Satsuki doesn’t seem too impressed, and Honnōji High School may turn around to start leading the rebellion against REVOCS next episode.

As to the overall problem, I believe the traditional solution is negotiating a mutually beneficial symbiosis, such as the one Ryūko and Senketsu. 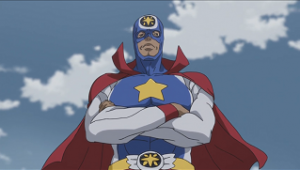 Samurai Flamenco #15 – Episode after episode, I try and fail to figure out what head writer Hideyuki Kurata is smoking. But this week, it was definitely rolled up in a copy of Watchmen.

(Right, I have to explain that for people who only saw the movie. In the original comics, the trumped-up threat meant to cause unity is not Dr. Manhattan, but a giant alien squid put together by some of Hollywood’s finest, just like the enemies Mr. Justice says he was fighting.)

So having revealed that all the superheroes Masayoshi idolized are real, now his biggest enemies have turned out to be manufactured. What next? And when did the Prime Minister develop the ability to punch craters in the floor? I wonder if that’s really the same person we first saw being flummoxed by the appearance of King Torture’s minions. 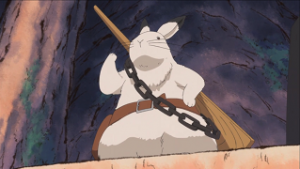 Hozuki no Reitetsu #4 – Something Japan and Europe have in common: Gory old folktales have been progressively sanitized for modern audiences. In similar ways, too– compare the story of the farmer and the badger (actually a tanuki, as the story was told in this episode) and the original version of “Red Riding Hood”.

But if there’s one other thing sure to win over modern audiences, it’s a cute furry animal which is also a homicidal maniac. It almost excuses the author’s admission that he didn’t have a snappy ending for that chapter. 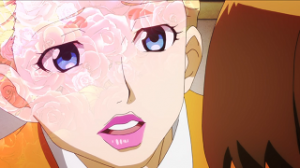 Nobunagun #5 – The point of this episode, I think, is that everyone has personalities diametrically opposed to their previous incarnations. Thus Nobunaga Oda has been reborn with social anxiety, Newton as a ditz, Gandhi as a jerk, and Jack the Ripper as a mostly sensible and decent guy. But prolonged contact with their former personalities may cause changes– at least that’s what Mirza seemed to admit. Which doesn’t bode well for Shio’s crush.

For those who couldn’t quite place the base names, that’s Alex Logan from The Last Starfighter, Jōji Atsumi from Chikyū Bōeigun aka The Mysterians, Captain Steve Hiller from Independence Day, and Dr. Clayton Forrester from The War of the Worlds. (As far as I know, Mystery Science Theater 3000 is completely unknown in Japan.) 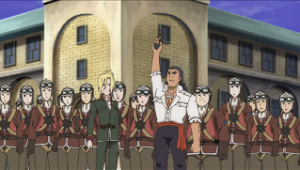 The Pilot’s Love Song #5 – The hardcore geek term for what’s going on in this picture is “off-model”, which is the fancy-schmancy way of saying “characters not looking as they are supposed to”. The root cause is that anime is made with tight budgets and tighter production schedules, and sometimes there’s just no time or money to fix it. Though sometimes, it seems like they really just didn’t care. You can be forgiven for thinking that this particular instance was due to putting all the effort for this episode into the swimsuit scenes.

The plot is being stretched a bit thin here too, but we did learn one thing about Claire, that she’s just as inconvenient for the revolutionary government to have hanging around as Kal-el is. Which says something about how much confidence they have in the success of this expedition.

What is this “End of the Sky” everyone is on about, anyway? If it’s where big floating rocks go, I wonder if they mean the edge of the atmosphere and space. In which case, even if this expedition succeeds, the revolutionaries may have had their problems taken care of anyway.

Please don’t shoot the messenger. I’m not responsible for the “high” and “low” art divide—into which categories we’ve shoved “art we collectively treasure” vs “art we collectively enjoy,” respectively. I’m just here to generalize, and to report that the “art” vs “illustration” distinction still exists, and that no matter how much love and money we lavish […]

In this week’s viewing: Epic fireworks are ahead with the conclusion of Brynhildr and a look back at Hunter x Hunter’s Chimera Ant arc.