In this week’s viewing: Hozuki no Reitetsu and Kill la Kill have epic sporting meets, Samurai Flamenco celebrates love and friendship, and more! 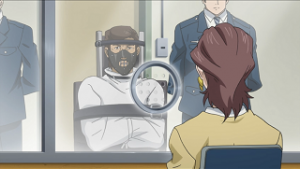 Samurai Flamenco #16 – In honor of the season, this episode’s theme is The Power of Friendship. It’s a testament to the quality of the writing that we don’t get a monologue addressed directly to the viewers to say so in so many words. I admit Masayoshi’s encounter with Wise Disabled Homeless Guy does come close, but let’s not let that obscure the best part, which is definitely the reuniting of Miracle Mineral Muse.

Mari is finally starting to accept that she doesn’t have to be the most perfect person in the room in every single way, that Moe geniunely loves her and Mitsuki genuinely respects her for the talents she does have. It’s also awfully convenient that her crisis has brought her back to King Torture’s base, where there might be some lingering clue as to what’s really going on.

Let us also give it up for Mrs. Kaname, who is not only able to emotionally handle seeing her husband treated like a dangerous madman and possibly facing execution, but has already successfully covered up the involvement of one major player and made plans to spring Red Axe from a maximum-security prison if necessary. Now there is the sort of person you could really imagine being married to a superhero. 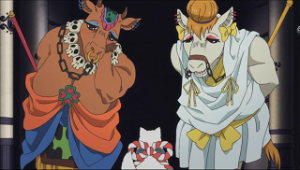 Hozuki no Reitetsu #5 – Here’s a series really hitting its stride. Having gotten most of the introductions over with, it’s now free to spend its time letting the characters be funny, and funny they certainly are. Hōzuki may be an absolute bastard, but given a challenge like organizing Hell’s sports day, he rises to it with the most entertaining aplomb.

It’s also helping that it’s spelling out some of the references in detail this time, either because local viewers need an explanation too, such as when exploring the intricacies of traditional Chinese medicine, or to hammer home a joke like the cow as the feminine ideal. (It is still a fact of modern Japanese life that women are expected to give up their careers upon marrying and become full-time mothers, which is believed to be a big contributing factor to Japan’s abysmal birthrate.)

It gives a little extra barb to the cow joke that author Natsumi Eguchi is, to the best that I have been able to research this week, a woman.

I’ve been looking at this series as a very niche one, to be recommended only to people who are willing to look up the references, but a couple more episodes like this one and I’ll be happy to tell everyone to watch it. 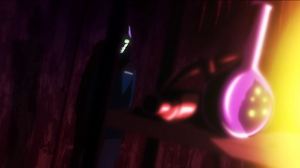 Nobunagun #6 – All right, the twist got me. Right after explaining how mini-EIOs can wind up in living hosts, it’s only natural to have a story about one winding up in a human and taking control of them. In fact, it got me so thoroughly that I still think we might see a plot like that at some point. I can’t believe that this incident is completely unrelated to what we’ll see down the road.

At the very least, that was a darned good horror story. And it also serves to give us a look at the First Platoon, and someone serving the sort of role that Shio may eventually fill. Geronimo was no slouch in the tactics department, and it looks like his reincarnation has access to those skills just as Shio does with Nobunaga. 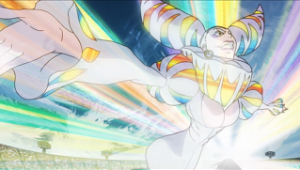 Kill la Kill #17 – Yes indeed, Satsuki is turning against her mother, and apparently has been planning to do so for some time, even before getting the full story about Life Fibers. Ragyō looks like the ultimate villain now, albeit a much less interesting one now that we know she’s simply in it to see the rest of the human race destroyed just ’cause.

Although I think Ryūko will get one more shot at Satsuki, that’s going to have to wait. If Ragyō can get stabbed through the heart twice in this episode and still be up and fighting in the preview for the next one, she’s going to require their combined talents to take down. 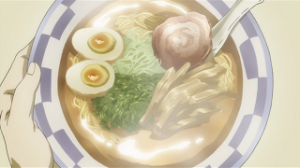 The Pilot’s Love Song #6 – At last the floating island arrives at the Holy Spring, a mid-ocean curtain of spouting water on a heroic scale. What function does it serve? Is it another sign that something about this world isn’t functioning correctly? Eh, never mind those questions, let’s spend the other 20 minutes showing our characters as amateur restauranteurs. Aaaargh!

It’s an iron law of anime that foreigners, aliens, and other unusual people must, when confronted with a bowl of ramen with all the trimmings, first look dubious and then be won over by its astounding flavors. (If anyone wants to remedy TV Tropes’ oversight in not including this one yet, I wish to suggest the title “Conversion Ramen”.)

It’s also a trope that a quiet moment like the one on the swings is the prelude to one or both characters getting killed. My money’s on Mit-chan to provide the headline death in the next episode.

It’s seriously getting close to the end of the 2012/2013 season. Next week May will be here and with it comes a bunch of season finales and the odd cancelation. It’s the time when I wonder what I am going to watch. Sure True Blood will be along on June, but that will only feed […]

ICESat-2 successfully starts lasering Earth, telling us about it