Home Anime/Comics What Were You Expecting, Baby?

[Author’s Note: I will be talking a lot in this post about the anime Cowboy Bebop and definitely giving away spoilers. So if you haven’t seen it yet…go watch it. Please.]

Not long after I wrote last week’s post, I decided to look into what other people all over the internet thought of Space Dandy. Quite frankly, I was shocked at all of the negativity. It appears that everyone thought either that the series was going to be on par with Shinichiro Watanabe’s other works (most notably, Cowboy Bebop), or they didn’t realize how much the series was going to center on Dandy’s lascivious libido.

Really? Did we all watch the same preview? Because right from the get-go, I knew exactly what to expect, and it’s exactly what I got. Critics are screaming “sexism,” and while I’m certainly not going to deny that, they keep comparing this story to its older brother, Bebop. And while it’s true that Cowboy Bebop is a veritable anime masterpiece, it’s definitely not free of extremely harmful sexism—in some ways more harmful because it’s not nearly as obvious.

Dandy is a little bit loathsome. He’s dumb as bricks, he’s lazy, and he loves to objectify women. Gross, right? Spike, on the other hand, is dramatic and brooding and “a man with a past.” May I remind you all that he literally tore apart an entire crime syndicate because he couldn’t keep it in his pants? Because that is definitely the entire reason that he’s on the run from Vicious.

And let’s compare the women. In Space Dandy, we have three named women so far: Honey, Scarlet, and QT (yes, QT is a female robot). Honey is a waitress who works at Boobies. She’s blonde and sexy and a little air-headed (except not, because in the subbed version, she actually takes an underhanded dig at Dandy while pretending to be dumb, but that’s besides the point). Okay, not a great female character by most standards. Scarlet, on the other hand, is far smarter than any of the other characters and she fights better than anyone else (as soon as she started fighting, I noticed that the animation for that sequence is remarkably similar to a lot of the animation of Spike fighting). QT is wonderful, partially due to the fact that she’s a female robot who does not have a human female body. She’s not a fanservice robot! Almost every science fiction anime in history has at least one fanservice robot—because what better way to objectify a woman than by actually making her an object! But QT is small and out-of-date and extremely put-upon—and more or less female.

In Cowboy Bebop we also have three named and recurring female characters: Faye, Ed, and Julia. I’m going to go kind of out on a limb here and say each of these women has a rough equivalent to those in Space Dandy. I would say Faye is most like Scarlet—they both have their own agency, do their own thing, and though they are certainly sexy, it is not out of their character to be such. Faye has a lot of brains and a lot of sass, not to mention a complex history and interesting story all of her own. Ed is best equated to QT, in that they are both characters who you can easily forget/not realize are female. Ed is also a really wonderful character, being a teenage super-genius who gets the crew of the Bebop out of trouble more times than can be counted. That leaves the comparison of Julia to Honey, though I actually don’t feel that this is an entirely fair comparison. In fact, I think that Honey has already had more lines in two episodes than Julia had in an entire 26-episode series. Julia is the empty shell upon which Spike places all of his fantasies; her temperament (or complete and utter lack of character development) makes her remarkably ill-suited to being part of a crime syndicate, and her skin-tight cat suit is entirely out of character. Her affair with Spike is the most disappointing catalyst to a series-long feud between two attractive and broken men. 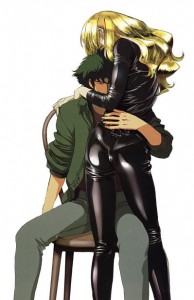 So please, stop trying to sell the idea that Cowboy Bebop is a more palatable story for female viewers or anybody who is made uncomfortable by misogyny. Because I love Cowboy Bebop and hold it in extremely high regard, but it’s not any better than Space Dandy in that way at all. Additionally, for everyone who is put off by Boobies, can we have a brief moment to talk about how it’s satire? Boobies is not meant to be taken as serious fanservice—there’s a four-breasted alien who looks like the Swamp Thing! That’s not sexy, it’s absurd! Watanabe and his writers, as far as I’m concerned, have taken this obsession to it’s nth degree, making the audience uncomfortable in an effort to point out how stupid and disturbing the whole concept is. Maybe that doesn’t read immediately, but the intention is definitely there. (It tangentially bothers me that people seem to be using sexism as the only means to complain about the series, as though it will win them brownie points with feminist geeks the world over. I’m a feminist geek, and let me tell you—we’re sure as hell not this critical about our own Western media depictions of women.)

More than anything else, Watanabe is making fun of himself (and definitely, definitely making fun of Cowboy Bebop). Maybe that’s what’s getting everybody’s goat; Bebop is sixteen years old, and people won’t stop talking about it. The series ends in death, so Space Dandy sets right out and kills the protagonist in the first episode. They’re even set in the same universe, or at the very least both series use the same monetary unit, the Woolong. And Dandy is the quintessential Watanabe protagonist in many ways: too cool, posturing, golden-hearted…the only difference being that he’s a complete farce of a man (think Spike meets Johnny Bravo). I don’t expect every viewer to get the Watanabe-centric-self-references right off the bat…but once again, since everyone seems to be disappointed that this isn’t Cowboy Bebop, Part 2, I’m surprised more folks haven’t picked up on it.

Though the two series are more similar than first meets the eye, Space Dandy had the unfortunate disadvantage of being compared with its predecessor. It needs to be taken for what it is, and not as some spiritual descendant of every hyper-serious series in Watanabe’s directorial past. If the hype and expectation hadn’t been so high, perhaps the critiques wouldn’t have been nearly as damning—and perhaps viewers would be able to see beyond its happy-go-lucky exterior to some of the more sophisticated commentary being made at the expense of science-fiction, anime, and the series’s own creators.

But seriously, everyone was surprised by Boobies?  I mean, it was right in the trailer…