Home Uncategorized In defense of Lemuria: Shaver Read Through Part 1 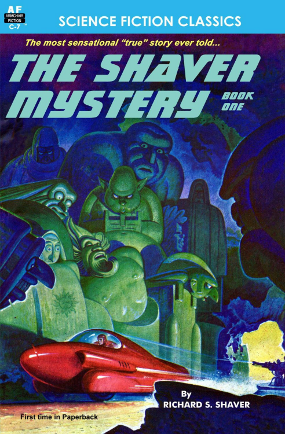 So I been clicking around trying to learn some more about this wonderful genre we call SF. I must have finally reached the next lvl or something because it seems that everywhere I turn, I’m finding interesting tidbits that I hadn’t yet discovered. Most recently, I’ve discovered ‘The Shaver Mystery’. This little gem is not just part of the general SF timeline but part of Amazing Stories’ own history. While it seems like there aren’t many who remember the events of the Shaver Mystery in anything resembling a positive manner, I’ve come to find it quite fascinating. As such, I’m proposing a read through the text itself (text can be found here), and a discussion around . . . well really anything I can think of. I’ve split the text up in to five parts (five posts) which will hopefully allow me to read a little each week, but also do some research and attempt to provide interesting discussion about this seeming strange series of events. Let’s start with what happened in the first for chapters:

We are introduced to the world of Mu, which is actually Earth in some other time. We meet the main character, Mutan Mion, and the story begins when our poor hero gets kicked out of painting school (I can see this scene coming straight out of Shaver’s own experience though I don’t currently have any facts to back that up). Tough break. He ventures down a great elevator into Tean City, literally the center of Mu (it’s underground!). It is the greatest city in Mu, and is devoted to science. As Mutan has no facility in the arts, he must make his way in this new city. 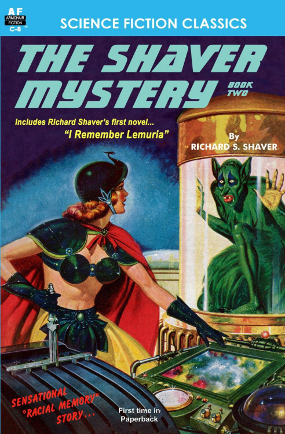 Our first view of Tean City is its women. Apparently they come in all shapes and sizes. The first we meet has six arms and nothing short of a giant. Next we meet a woman “whose upper part was the perfect torso of a woman and whose lower part was a sinuously gliding thirty feet of brilliantly mottled snake.”(pg.8). Mutan is hardly finished fantasizing about the “coiled” embrace of this beautiful variform (because that’s a word) when he meets Arl, who has “Such a beautiful tail . . . Of the softest, most beautiful fur.”(pg.9). Whatever floats your boat right?

Arl is a sweet and intelligent girl who shows Mion (and us) around the town, which seems more like a huge university and eventually the two attend a lecture together. During class, we’re taught what I believe will become the center conflict throughout the book. Essentially, the Sun puts off this space dust termed Exd. It is from this dust that all matter comes into being.  However, when this dust begins disintegrating (hurray for entropy) it becomes a poison and eventually causes aging (sensing a cancer metaphor here somewhere). The inhabitants of Mu have developed a way to filter the disintegrated ash but as the sun ‘ages’ it puts out more and more and the filtration becomes harder and harder to achieve. 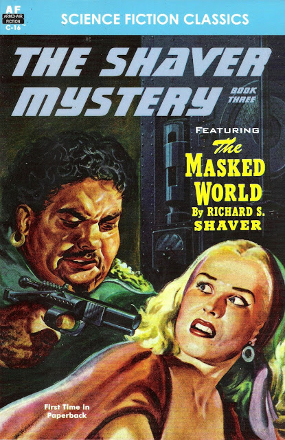 Amidst the explanation of this great conflict, Mutan and Arl are made aware of a smaller and more immediate danger. To avoid the poison, many have considered it necessary to leave the planet; however, it appears that there is a faction Mu’s governing body which does not want to see anyone complete this objective. Once off the planet, the effects of the disintegrating Exd will no longer affect Mu’s people, and the ruling body will lose much of its power (it seems that the disintegrating Exd causes a degeneration of the brain as well, making those it affects dimwitted). Mutan and Arl go to a dance later in the evening and a variform is killed. Mutan, Arl and the other dancers suspect it is because this variform knew too much.

They attempt to seek solace in the advice of their wise professor only to find that he has gone missing! At this point it is unanimously decided that they must leave the planet right away and return with larger numbers to usurp this degenerate ruler. At the conclusion of chapter 4, Mutan, Arl, and a few others have made a daring escape and are weighing their next course of action.

Without delving into the history and controversy behind this story’s publication (at least not yet, perhaps more in later posts) I mostly want to point out what a rich and interesting world Shaver presents us with. The populace of Mu (Atlans?) are seemingly god like creatures who, without the degenerative affects of Exd would continue to grow and mature forever.

Also, I was intrigued by a scene in the classroom in which the problem of Exd was first explained. One of the chapter notes provided by editor Ray Palmer describes Exd as in the terms Shaver saw it:

“Poison dust from the sun gets into everything and accumulates in the body so we age . . . it gets filtered blood, filtered through the placenta . . . The simple filtration process CAN BE copied by man thus putting off old age.” 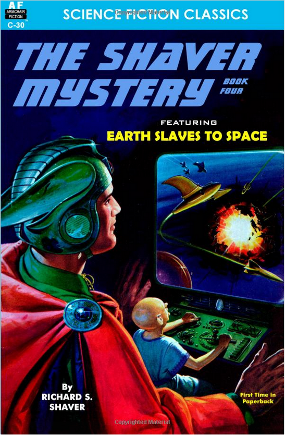 Immediately two things come to mind here. First, radiation poisoning, which I believe was likely a well accepted theory (I was thinking Marie Curie but apparently it goes further back than that). Second, I was thinking of the ‘young blood’ being used to help older generations and such and it seemed to be distinctly pointing at the use of stem cells. This shocked me at first because I think of stem cell research being a very modern (and controversial in its own right) topic. It seemed pretty amazing to me that shaver would have included something like this in his world (or theory of our world). Unfortunately, a little research proved it wasn’t as amazing as I had originally thought. Turns out, people have known about stem cells (in some form) since 1908. However, even though these two ideas are not ground breaking in any way, I still enjoyed there inclusion in the story thus far and they certainly seem adequate as a catalyst to drive the plot forward.

Anyway, I think that’s all I’m going to put forward for now. I hope you’ll join me in future ‘Shaver Mystery’ posts and of course, please leave comments below. I’m always anxious for new ideas, points of view, and expertise so . . . have at it!