Review of Cloud Atlas by David Mitchell, focusing on prose and creativity in plot. 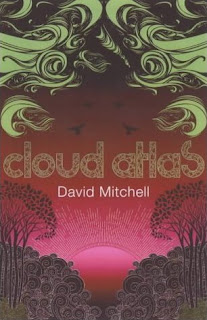 Admittedly, I had never heard of this until I saw a story about the film on the news. This is probably going to go down as David Mitchell’s magnum opus. And rightfully so, it’s very creative for a book that has commercial appeal. I don’t want to tackle the various motifs and plot, per se. I think that spoilers are immanent if you dissect someone’s work like that. But I do want to talk about what I liked and didn’t like from a more literary viewpoint.

First off is the complexity. The only reason I’m addressing this first is because it’s been touted as a main selling point. To anyone who’s taken on authors like Gaddis, Joyce, Wallace, Pynchon, etc, the plot will read fairly streamlined in comparison. However, I don’t think it was ever Mitchell’s intention to be too mysterious, ambiguous, and base his plot on underlining complex mathematical themes. It’s definitely accessible to anyone. Also, I think the complexity hype has more to do with the average reader experiencing some substance for the first time in their lives. And in that regard, it has more creativity and meaning than 99 percent of what you’d typically find on the New York Times’ best seller list.

For me the only downside to this book is Mitchell’s prose. I can understand the voice he was trying to achieve during the Victorian era through early 20th century parts of the book. And, while it does resemble writer’s like Hugo or Stoker, it ends up being very turgid and belabored. I appreciate what he was trying to do, but it takes a lot more talent to pull that, mostly annoying, style off. So my first impression of the book was very negative; I felt like I was reading something written by that douche bag from the bar scene in Good Will Hunting.

The rest of the book ranges from uninspired to flashes of brilliance, still talking about the writing itself. So, the end result isn’t something that will probably be studied by scholars for years to come, but its greatness really lies in its intertwined plots and philosophical content. And really, that’s just as important and difficult to achieve in an intellectual work.

Anytime a book explores the future, it tends to get some of my interest. I’m going to give you only one spoiler, and that is you will be heading into the future of the world in Cloud Atlas. And that experience actually had me feeling very apprehensive while I was reading it. I don’t really want to get too deep into this because you deserve the surprises. But I honestly felt the gravity of each leap into the future; this was definitely where it really stands out as a work of art, in the history of literature.

Now you can look at the book as a set of individual stories linked together through shared, historical events. Or you can zoom out and explore it as a whole plot. I did both and got something out of looking at it each way. Also, it seems to invoke Imaginary Time in that same way Kurt Vonnegut did in Slaughter House Five, which is a formula for success as far as I’m concerned.

In conclusion, there is a real journey to be had here; one that’s well worth taking for any reader. I think Mitchell’s greatest talent was creating something that is accessible to everyone. And while it will be challenging to some, it should be entertaining and rewarding for everyone. So if you’re more of a literary snob, don’t go into this expecting something mind blowing. Just go into expecting to experience some creative, entertaining story telling which explores morality, existentialism, metaphysics, and even epistemology.

This week Steve looks at a Hellacious TV series, all about the Devil in Los Angeles, then jumps back and looks at Modesty Blaise in graphic format. Take a peek!

As far as pulp SF goes, Orbit One by Mel Jay fits the mold. It has many of the classic elements fans usually go for with the touch of social commentary we’ve come to expect.

Sneak Peak! Page 10 of A Doctor For the Enterprise