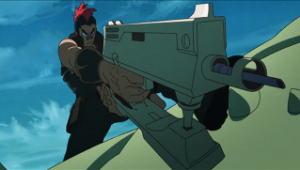 Kill la Kill #5—This week’s new character wields a sewing machine gun, wears bandoliers of exploding bobbins, and has strong feelings on the state of interpersonal relations between humans and clothing. Costumers who feel your hobby lacks respect for being insufficiently macho, this is the show you’ve been waiting for.

A couple of this week’s school clubs may need some explanation. Rakugo is a form of Japanese stand-up comedy, except that isn’t delivered standing up, but rather kneeling and in traditional dress.

The club that wasn’t named appears to be a karuta club. Karuta is a card game that in its most classic form is played with two decks of poems from the Hyakunin-Isshu, a famous collection of 100 tanka (5-7-5-7-7) by 100 different poets. A reader reads a randomly selected card with the first three lines of a poem, and then the players attempt to be first to locate the card with the last two lines of the poem among those spread out before them. As they noted in the show, not something with great potential for physical damage. 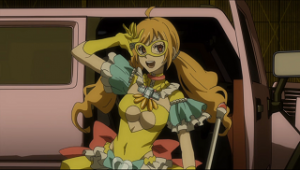 Samurai Flamenco #4—It seems like Japan is fairly crawling with young people just waiting for their chance to debut as costumed superheroes. Masayoshi is introduced to one this week when he discovers that a member of the idol group he met a couple weeks ago has grown up worshipping magical girls and is ready to burst on the scene as Flamenco Girl, who has him outclassed in every area except practical costume design.

Flamenco Girl’s tragic, superheroic weakness is apparently a soft spot for men in uniform. Which brings us to the topic of Goto’s unseen girlfriend.

We can rule out the girlfriend being imaginary, given that he did have to cancel an actual date with someone. The fact that said someone is only known as “Girlfriend” so far suggests that the writers have a surprise lined up for us. The Law of Character Economy doesn’t seem to apply here, because he said it was a long distance relationship. 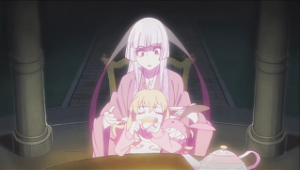 Kyousougiga #4—Yase seems to be the character most based on Alice, not just in terms of visual representation, but because she goes through many of the same experiences: growing, shrinking, descending through a burrow full of cabinets, drinking tea.

The business with the stuffed rabbit indicates for the first time a solid connection, going from the looking-glass world to the Shrine. Get on the train, and you wind up somewhere in the outside metaverse.

I think this is what we have for backstory so far: when Myōe and Koto the rabbit departed, Myōe (for some reason) swaps forms with his son. They then somehow wind up at the Shrine. The real Myōe, using his son’s appearance, is the person Koto the girl knows as Inari. The present Koto knows Inari as her adopted guardian, but Myōe’s children think they see a family resemblance. Perhaps she’s another person conjured out of Myōe’s pictures, like Yase and Kurama. 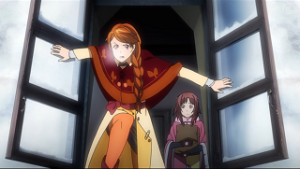 Galilei Donna #4—Well, that was disappointing. Rather than solving a riddle, the sisters just let the ship AI figure out that Galileo had microdot technology. Then they expend no energy actually looking for the next page of notes, but rather have it presented to them after they learn a Valuable Lesson about how homeless people are people, too.

I’m not sorry to see Kazuki give up her position as ship’s pessimist, but here’s hoping the next stop on their trip is a little less contrived.

Say, are you going to Orycon this weekend? Want to hear me go on and on about all sorts of topics in person? Maybe even about anime? Here’s my panel schedule. Or, alternatively, there’s your list of panels to avoid for an enjoyable convention!

The book is like those rare courses some of us are lucky enough to take–the ones you don’t want to end.