Every year in October the hobby industry has an exposition for the hobby industry manufacturers to reach the retailing community and show off their new and existing products. It is usually held in Chicago, although it had moved to Cleveland last year, and was recently held the first week of October in Chicago. The first two days, starting Thursday, are for the industry and retailers only but then Saturday the doors open to the general public as well. I have never been able to attend but still watch to see what new model kits are introduced each year. This year there was a bumper crop of new geeky products shown on the floor which will be detailed in the rest of the article.

[two]First off is Moebius Models.  Moebius operates out of Deland, Florida which is only about an hour from my home. It is run by Frank Winspur who is a modeling hobbyist himself. Frank started Moebius in 2006 and has been on a roll ever since producing numerous new kits for the genre every year. This year Moebius was showing off new products previously announced and close to release. For fans of the classic Munster’s TV show they had the Herman and Grandpa models on display. These should be on the shelves in the next few weeks and are definitely on my buy list because of my fond memories of the show I watched in my youth.[/two] [two_last] 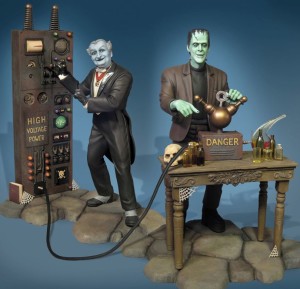 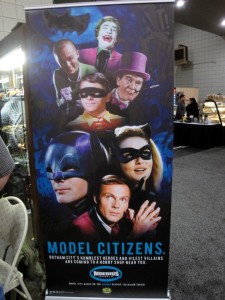 [/two] [two_last]Moebius was showing their new 1960s TV show Batman models as well. I believe they will ultimately produce most of the characters from the series, which starred Adam West, and they had a prototype of Batman and the Julie Newmar Catwoman. I fondly recall watching the campy show back then and am looking forward to these new kits. Along with this TV/Comic hero Moebius is going to sell a resin Superman/General Zod combo which likely means it will be a limited production run and be far more expensive than their typical styrene kits. But the excellent looking sculpts should be extremely detailed in resin and worth the price.[/two_last] 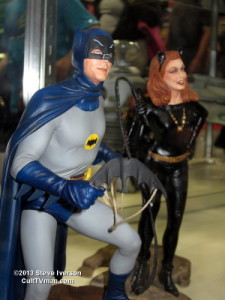 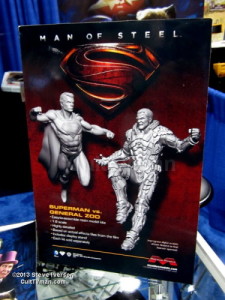 Another new kit that Moebius announced some time back was their Mars Attacks Martian figure. I’ve seen this on display before and release is imminent. Once again it is on my priority list as I end up purchasing almost everything Moebius produces. Moebius will also introduce another crazy monster car model, the second in their line of Von Franco monsters and cars series. This one is the Stoned Hoods and Crooks  I’ve seen build ups of the original, of which I have one unbuilt, and they are reminiscent of the Big Daddy Roth rat fink creations of the ‘60s. 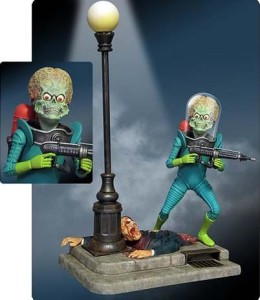 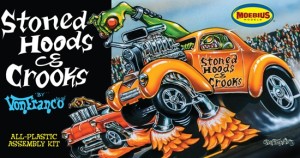 [two]Moebius has previously released models from the SyFy channel Battlestar Galactica series and  is now releasing some of the spacecraft from the original television Battlestar Galactica series. These are the Battlestar, the Viper, and the Cylon Raider kits. Revell had released similar kits in the past which I believe are out of production so this will fill a void for modelers interested in the original show.[/two][two_last] 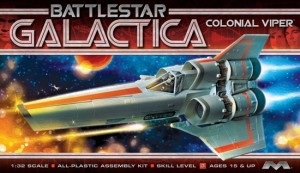 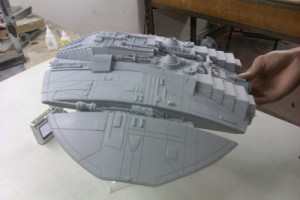 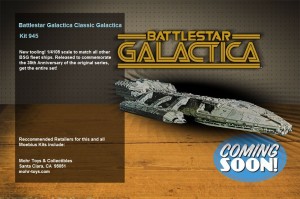 [two] Finally Moebius is getting close to releasing their Lost in Space robot model. From what I have heard there were some minor production difficulties, primarily designing the clear head dome to make the unavoidable seam as hidden as possible. But I am sure whatever finally appears in the box will be well done. When producing plastic models there are always some seams/joints that are basically impossible to completely hide. The model is 1/6th scale and will stand about 13” tall making it a fairly large model.[/two] [two_last] 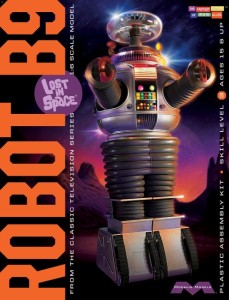 So this is what Moebius has in store for modelers for the next few months.  I can’t even build models as fast as they are producing them!

[two] Next up was Round 2 which owns the AMT, MPC, Polar Lights brands and also recently purchased the old Lindberg product line. First off in their new Lindberg line is a re-release of one of Lindberg’s original spaceship models, the U.S. Moon Ship from 1958. These have not been in production for a number of years and should make many modelers looking for this kit very happy. A quick look on eBay shows only one for sale at a very high price. 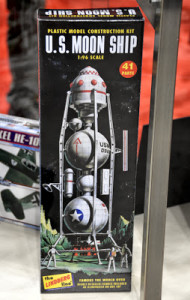 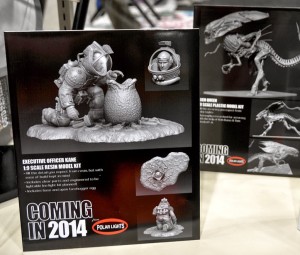 [/two] [two_last]Round 2 recently licensed the Alien movie and is producing the Alien creature, Captain Kane, and a Sulaco spaceship. These should be on the shelves starting early next year marketed under the Polar Lights brand. It appears they will have the Alien Queen, Executive Office Kane peering into the alien egg, and a spaceship which I believe is the Sulaco from the third movie. This is one license that many modelers have been hoping for quite some time.[/two_last]

Polar Lights is also introducing more in their comic character line. They recently released Marvel’s Wolverine and will soon have Thor on the shelves. They are also doing a classic Superman in a new pose which hasn’t been produced in styrene in a number of years. The pose is exciting and I am looking forward to building this one. I remember in my youth having an Aurora Superman crashing through the brick wall and painting it on the front door step. Finally in the classic movie character line they are producing a model of the Wicked Witch of the East from The Wizard of Oz movie. That brings back another fond memory of watching that once a year with the family when it was an annual special presentation on broadcast TV. The witch always scared me so I’m not certain I’ll be picking this one up! 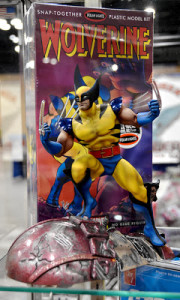 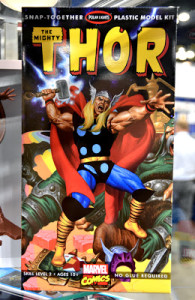 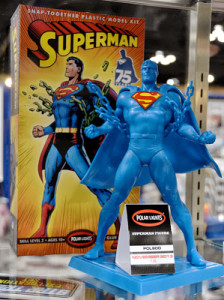 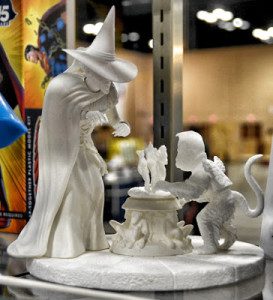 The MPC brand from Round 2 is bringing back a couple of real spaceships, or actually rockets, from the 1970s, the Russian Vostok and the US Titan IIIC. They can be built to fly as model rockets or simply for display as desired. I recall having one of the Vostok models when they were first released around 1970 and was not impressed with it as a flying rocket. It was quite heavy and because of the hard styrene and weight always seemed to me to be a rather dangerous rocket to fly. I only flew mine once with a C engine because of this and because the body tube that held the parachute was so small I didn’t believe I would get the parachute to deploy making it even more dangerous. Both models though do make good display rockets. The Round 2 AMT division will be releasing an Apollo Saturn V kit in 1/100 scale. I’m not sure if this is a re-release of an earlier kit but as far as I know AMT never produced such a kit in that scale. It is possible they are using the Revell molds from their Saturn V. 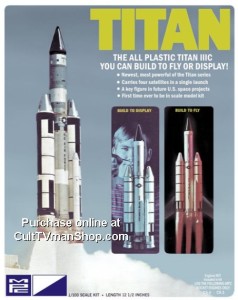 [two] MPC is bringing back their Space: 1999 kits which will include the much sought after Eagle lunar transport and the dune buggy styled Alien vehicle. The Eagle has been out of production for a number of years and when available on eBay typically commands a good price. I will definitely purchase one of the Eagles but will probably pass on the Alien vehicle. 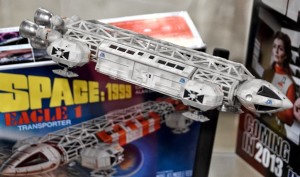 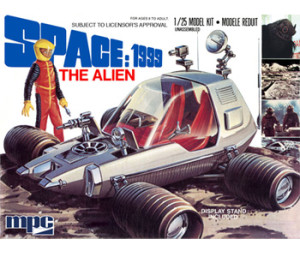 Round 2’s AMT division was showing some of their Star Trek line of kits. AMT has held the license to Star Trek since the original series and recently has been re-releasing some of their early kits that have been out of production. The Enterprise bridge set, which has been enhanced, was already announced and should be available soon. They are bringing back the Star Trek Exploration kit which features a communicator, a phaser, and a tricorder. And finally they will put the USS Defiant from ST: DS9 on the shelves again as well. These are all kits eagerly awaited by many modelers. 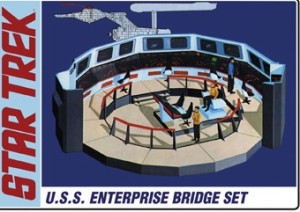 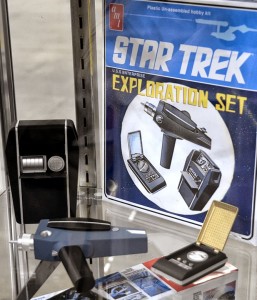 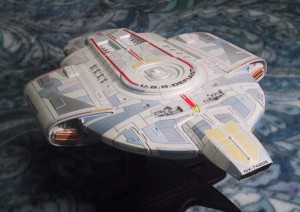 [two] Finally for the car with a monster fan and in line with similar models from other manufacturers AMT will release the first in what might become a new line of such kits, Two Much. As with the Moebius Stoned Hoods this is similar to the creations of Bid Daddy Ed Roth back when I was growing up. 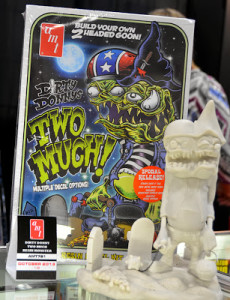 [two] Pegasus has been producing some unique geek models for the past three or four years. Their booth at iHobby highlighted some new products in their expanding line of kits. They are introducing a pair of ‘50s style rocket ships in different scales. These are the Cosmo (First Spaceship On Venus) and the Luna (Destination Moon). The Luna  will be available in one version in scale with the Cosmo and in a second larger scale kit. They also are producing a German flying saucer, the Hauneabu II. Pegasus also was showing their M.L.E.V.-5 Mars Lunar Explorer Vehicle “Mars Hopper” which has been in development for two plus years now. The model is quite large and will have over 300 pieces. It reminds me of the service pods from 2001 and I am very interested in it. At a past Wonderfest I had spoken to the Pegasus rep about the status and he was uncertain that it would be produced because of the complexity of the model and the production cost. Now though it looks like I may get lucky and see this great looking kit on the shelves someday. [/two] [two_last] 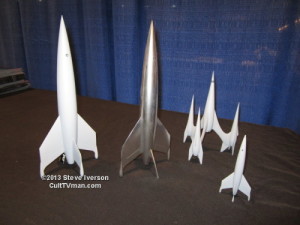 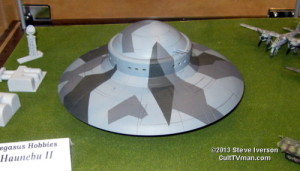 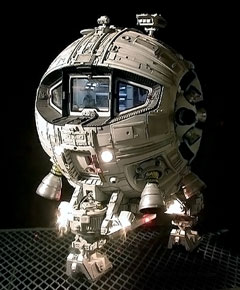 That fairly well ties up what the various companies that cater to the science fiction, horror, and comic character modelers have in store for the next year or so. It is certainly an eclectic selection of products and modelers have a big year to look forward to for certain.