This is a film that I really hope makes the rounds. It is another project funded through Kickstarter, and a solid science fiction film at that 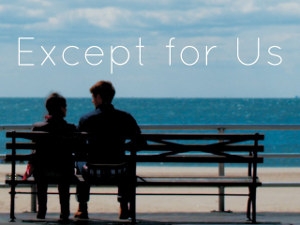 Time travel is one of the few science fictional subjects that regularly gets the romance treatment. From Richard Matheson’s Time After Time to the exceptional short Conversations About Cheating With My Time-Traveling Future Self (which I reviewed). Time Travel has an immense amount of romantic possibilities.

The first words of the short, as our two characters are laying in bed, are “Your name’s not Mark.” From there, they talk, bringing up the awkwardness of the situation (a falsified blind date and a one-night stand), followed by the revelation of a time machine in the corner. The conversation is strange, and it sets the stage for a time-travel film.

We see our hero, John, interacting with his time machine, which seems to be influenced by George Powell’s 1960 The Time Machine. It’s not a flashy, extensively CGI-ed beast of a time machine, but a modified bike with bits and bobs. It’s decidedly lo-fi, recalling some of my favorite shorts which rely not on knock ’em out design, but on humanity and the audience’s ability to accept that sometimes, flash ain’t required.

As the short goes on, we see John and his ‘blind date’, Kim, go through the date that preceded the opening, and then the replay of the date, and Kim discovering the truth about John’s time machine, which he considers more of an “Art Piece” than a practical tool.

What we are actually witnessing is a tour of the formative portion of a relationship. John plays the scenes over and over, with different scenarios and outcomes, in almost an anti-Groundhog’s Day-esque series of dates between John and Kim. Is John trying to perfect their relationship? No, not at all; or at least not very well. We are encountering what happens when two people meet, under false pretenses, and the way a relationship is like a mountain road: one false move to either side and that is where disaster lies.

There is a certain murkiness to Christopher Ventura’s script. We don’t get a lot of explanation and no resolution at all, which is a choice I whole-heartedly endorse. We are left, dropped on the ground, having to figure out how the couple goes forward. The dialogue is wonderful, the pacing exactly what you want in a short like this. It’s slow enough to allow the characters to fill all the available space,while it moves us between interactions with a wise eye. The actors make the most of every line, especially Patricia Zeccola as Kim. She plays a combination of naïveté and almost come-hither bluntness in her interactions with John, and later with his time machine. John is played with a certain detachment by Andrew Ridings (and if you get a chance to see The Layla Project, which he’s in, do it!). He’s awkward, stiff, and somehow seems out of place in every situation. Even as he and Kim are deep into their enjoyment of a night of passion, he seems a touch lost. Maybe it’s only his time machine that he understands? The short is a bit chatty, but it works and holds you all along.

Except for Us is beautifully captured with a precise sense of purpose to every shot. Interiors and exteriors glow, at times, and at other points, it’s a flat wash of light and shadows. The handheld work and the locked-down shots are all well woven into the story. The music, by Pontus Gunve, is wonderful, and not over-used. Too often, shorts will get great music and thread it through the entire film. Here, it’s well-placed and stays exactly as long as it needs to, providing a strong sense of the moment’s importance.

This is a film that I really hope makes the rounds. It is another project funded through Kickstarter, and a solid science fiction film at that, though you could argue that it’s not science fiction at all, that it’s a relationship drama. The entire metaphor of the film could be contained a simple exchange.

John – “Time travel. You have leave behind everything. Everyone.”

That is the story of a relationship, no? You have to drop everything off, leave all others behind, and jump into it with that other person. You’re traveling through a new set of experiences, a new timeline, with a new person. You are traveling through a new stream, a pair of chrononauts, and it’s not easy, in fact, it’s often really hard. Of course, you don’t get the chance to go back and make things happen over and over…

If that’s what really happened.

You see, we’re not sure if what we’re seeing is the effects of time-travel or merely John’s reading of the new situation he’s found himself in through the lens of his own personal time-travel fantasies. It’s left kinda ambiguous, though a reading of it being all in his head makes the entire film a bit sadder, but also explains why he hasn’t used his powers for more nefarious purposes. Or maybe he’s just a bit shattered and can’t come up with a better use for his time machines.

Or he’s just nuts. These are all possibilities, and that’s what I loved so much about Except for Us. It left it up to us to figure it all out.

Andrew P. Weston has been a regular contributor to Amazing Stories for quite some time now. A former UK Marine, he has retired to the Greek Isles, where, in addition to writing for Amazing and enjoying the deep blue Mediterranean , he has turned his hand to a rarely practiced sub-genre of the military science […]

New Dr. Seuss Found in a Box comes to print