Home Fandom “Will people be in costume?” How mainstream media sees SF fans.

I work as a news journalist in a town which occasionally hosts a science fiction convention or collectors’ fair. And when these events come up, you can bank on these questions being asked in the office:

1. “Will anybody famous be there?”

2. “Can we go down there and get a picture of people in costume?”

3. “Hang on – are you saying actors charge money for their autographs?”

I’m sure these questions would make many convention-goers roll their eyes in despair, but it strikes me that they reveal something interesting about SF fandom and its relationship with the mainstream media.

It does seem odd to a lot of people that actors can charge £25 (around 38 US dollars) or much more for signing their name. Most people think, not unreasonably, that actors are more or less obliged to scribble their moniker in response to a fan letter or an approach at the stage door, as a thank you for their fans’ loyalty. But since the autograph circuit can be a way for a performer to convert a bit part in an SF franchise into some sort of lifetime income stream, I say good luck to them. 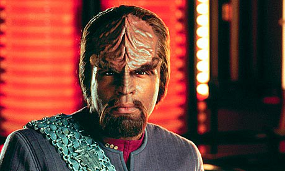 So, how about the question “Will anybody famous be there?”

It seems to me that this effectively means: “Will anyone who starred in an SF franchise in the 1960s or 70s be there?” Because with the exception ofthe revived Doctor Who, I struggle to think of any SF TV series whose principal cast could bank on being recognised by nearly everyone they meet.

For example, Mary McDonnell visited our town to talk about Battlestar Galactica. But even the revived Battlestar Galactica, widely discussed and enthused-about as it was in SF circles, was very much a minority interest in the UK. People followed it on satellite channels or through DVD boxed sets; there was never an evening where millions of people saw it simultaneously. So if you were trying to explain who Mary McDonnell was to most people, you’d probably say: “She was the president in the new Battlestar Galactica … No, not the 1970s thing, there was a new version … And she was the First Lady in Independence Day … No? Okay then, she was also in Dances With Wolves … Still no?”

All this says to me that while SF probably rakes in more money today than it ever did, it really consists of lots of minority interests rather than one homogeneous market. Yes, the biggest film blockbusters tend to be SF or have SF elements, but even they don’t win over the broad range of the movie-going public the way Star Wars or E.T. once did. They do good business, lots of people enjoy them, and then it’s on to the next $200 million blockbuster the following week.

So when someone asks “Will anybody famous be there?”, they really want to know whether they’re going to see Captain Kirk or a recent Doctor Who.

Now onto the thorniest question of all: “Can we go down there and get a picture of people in costume?”

I’ve winced when I’ve heard this asked in the newsroom, because I know a lot of SF fans will take offence at it. Plenty will point out that science fiction interests all kinds of people and that convention-goers are likely to include plenty of doctors, lawyers, IT professionals and lots more people with a rich and interesting life. Yet all the mainstream media seem to be interested in is taking pictures of a couple of people who turn up dressed as Klingons and who are assumed to be sad and eccentric characters who never grew up.

I understand this objection completely, but I also think we have to be realistic. Do you expect a visiting news photographer to take snaps of the doctors and lawyers discussing the finer points of Robert A. Heinlein and ignore the people who turn out in full Starfleet dress uniform?

If convention organisers become really sick of the mainstream media treating costume-wearing enthusiasts as though they were representative of all SF lovers, they could choose not to invite the press (which would probably not help their cause the next time they needed publicity). Or they could introduce a dress code that banned replica battle-dress and prosthetic foreheads. Alternatively, everybody could just relax about it. 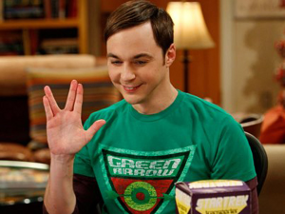 Surely in any community – whether it’s defined by national identity, race, sexuality or even hobbies and pastimes – there are people who like to dress up and attract a lot of attention and there are the majority who don’t. In SF, the fans who go to conventions are already a minority. The people there who conform to the stereotype of the fan in the floppy hat and long scarf of the fourth Doctor Who are a minority of a minority. And what’s wrong with them enjoying themselves that way?

As I argued above, science fiction today is a collection of many and varied minority interests which together add up to a large slice of the entertainment business. SF fans carry a lot of economic clout. One of America’s top-rated sitcoms is about them, after all, and in the UK, millions of people recently watched a live show announcing the name of the next actor to play the Doctor. So maybe it’s time for fans to relax about how the mainstream media sees us. We do sort of rule the world.