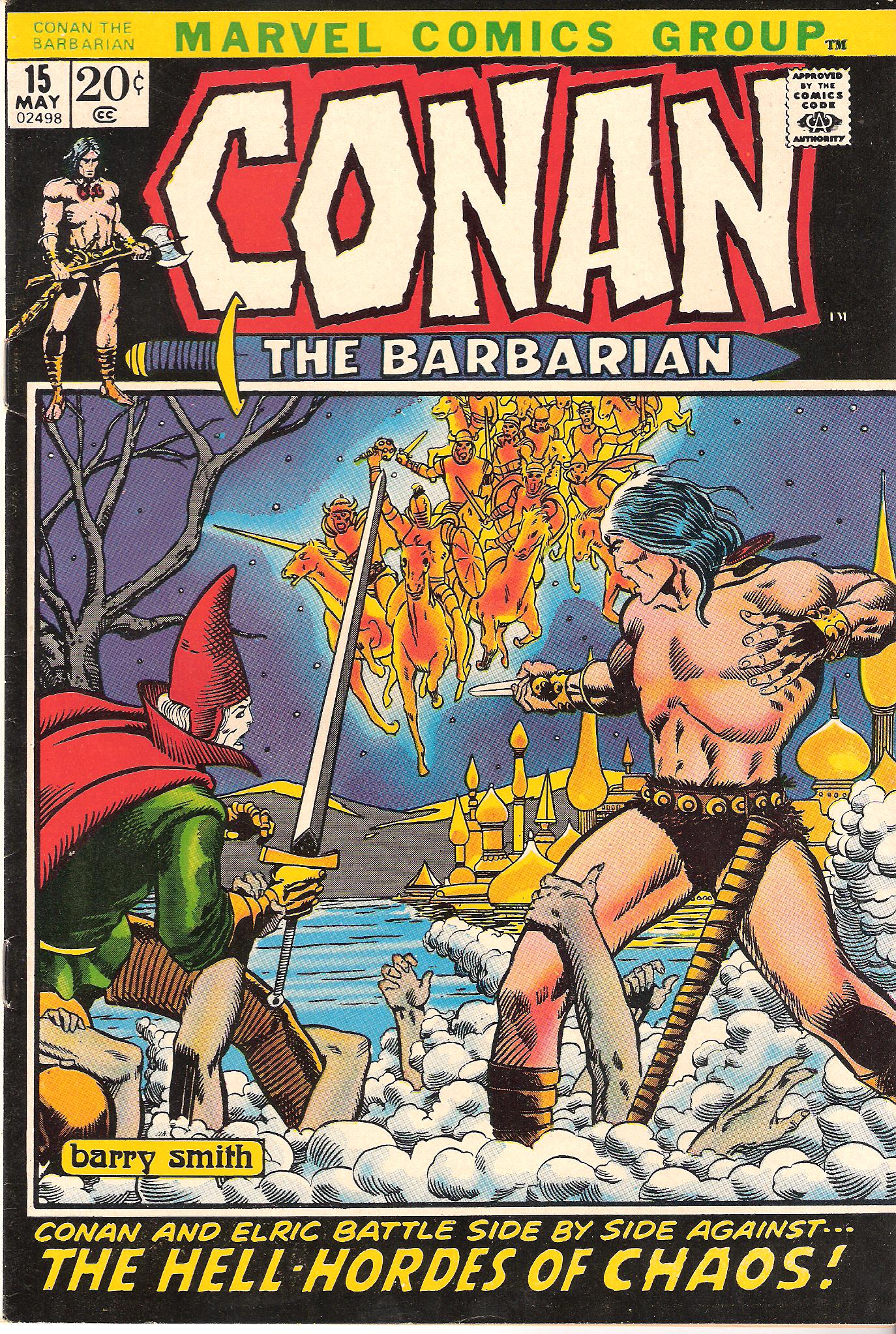 British fantasist Michael Moorcock is best known as a novelist and as one of the leaders of the New Wave movement of science fiction in the late 1960s and early 1970s. But his writing career began with comics.

Moorcock has told interviewers that his first job as a writer was on a comic book called Tarzan Adventures.  The comic was reprinting Tarzan stories produced for the Spanish market and Moorcock, then a teenager, convinced the editor that he could translate the Spanish text. What he did, however, was write new stories, to accompany the art.

Since those early days, Moorcock’s creations have been appearing regularly in comics, even if they haven’t reached the popularity of Conan the Barbarian.  Most of the comics have been adaptations, scripted by other writers, but there have been some original stories too.  In addition, in the past few years, Moorcock has returned to scripting comics.

This is going to be an in-depth look at the various times Moorcock’s characters—and the author himself—have appeared in comics. (One of the advantages of blogging is that I can tell you frankly that I’m not sure how long this piece is going to be.  Right now, all I can say is that it’s  definitely going to be more than one installment.)

If you’re unfamiliar with Moorcock’s work, some background might be helpful.  Nearly all of his books deal with the war between the forces of Law and the Chaos  (Even The Coming of the Terraphiles, his recent original Doctor Who story, mentions it.) This war is fought in different ways, in different time periods, across a series of parallel Earths known as the multiverse.  In every timeline, though, there’s a version of the Eternal Champion, someone who can strike a balance between Law and Chaos.

The best-known of these champions is Elric, the albino prince of Melnibone. To maintain his strength, Elric has to drain the life-force of the people he defeats in battle through his mystic sword Stormbringer.  And Stormbringer isn’t entirely under his control.

Interestingly, Elric’s first appearance in comics was with a character that could be called his direct opposite: Conan of Cimmeria. He appeared in issues 14 and 15 of the first run of Conan the Barbarian, published by Marvel Comics in 1972.  He and the Cimmerian join forces to find the tomb of Terhali , a Melnibonean empress who was exiled to Conan’s level of the multiverse.

The villain here is Queen XIombarg, one of the leading Chaos demons, and her lieutenant, Prince Gaynor the Damned.   This choice is a good indication of how Moorcock plots his stories because, if memory serves, Xiombarg had not gone against Elric at this point. She had only appeared in the adventures Corum Jhalen Irsei, another facet of the Eternal Champion.

Moorcock plotted the story with a friend, writer/artist James Cawthorn,  then turned it over to Roy Thomas to do the full script. The art was provided by Barry Windsor-Smith, who, at that point, signed his work Barry Smith.  Elric’s costume in this story is significantly different than how he’s visualized now, but it was consistent with how he is presented on the covers of the first American editions of Moorcock’s work.  Somewhere on this page should be an image of the cover of the 1966 edition of The Sleeping Sorcererss, painted by Jack Gaughan.

A year after these comics, Elric: Return to Melnibone was published. This was a collaboration between Moorcock and French artist Philippe Druillet, who is best known for his work in Heavy Metal magazine.  Honestly, I haven’t seen this one. The listing in Amazon suggest that it’s pretty rare and it’s priced accordingly.

In 1975, Stormbringer, a graphic novel based on the last book chronologically of the Elric cycle, was published in Britain. Both the story and the art here were by James Cawthorn. This book was roughly tabloid-sized, much larger than most graphic novels are now, and the art was in black-and-white.

Elric’s next comic book appearance was in black-and-white as well. He starred in “The Prisoner of Pan-Tang,” an original story which ran in Star*Reach #6 in 1976. Edited by Mike Friedrich,  Star*Reach was one of the first comics that went out exclusively to the growing network of  comic book shops. The story was by Eric Kimball and Steven Grant and the art was by Bob Gould. Fantasy artist Jeffrey Jones painted the Melnibonean for the cover of this issue. I’ve scanned part of it as the front page illustration for this post.

The Melnibonean returned to color—and to Marvel—in 1982, with an adaptation of “The Dreaming City,” an early story in the series. Roy Thomas returned to write the script, while P. Craig Russell provided the art. Russell does a great job making Elric look sick and haunted.   From here, Russell goes on to adapt several classic operas, a reasonable extension from the world of the Eternal Champion. 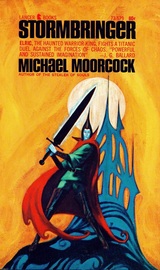 In 1983, Elric moved to Pacific Comics, one of the new , independent publishers (independent here meaning not DC or Marvel), for a six issue adaptation of the book Elric of Melnibone. Thomas is still scripting the comic and Russell is still contributing to the art. Now, though, he’s doing layouts for an artist named Michael Gilbert (who will later become known for his original creation, Mr. Monster.). His art is a bit looser than Russell’s—one of his influences is Will Eisner—but Gilbert has a touch for the surrealistic that’s very appropriate for the book, particularly as the story moves into other dimensions.

The next adaption, The Sailor on the Sea of Fate, is published by First Comics, another independent publisher.  Thomas and Gilbert are joined by Canadian artist George Freeman, while Elric is joined by three other manifestations of the Eternal Champion: Corum, Erekose and Dorian Hawkmoon.  This limited series runs for seven issues and is followed by a five-issue adaptation of Weird of the White Wolf.

This story begins with a lengthy adventure featuring a human character, Earl Aubec of Malador.  This may have been established elsewhere, but I think Aubec is the ancestor of the Von Bek/Beck/Begg family, which plays a prominent role in Moorcock’s later novels (and some of the later comics.)

First also publishes adaptations of Weird of the White Wolf; The Vanishing Tower and Bane of the Black Sword. Jan Duursema is the penciller for “Tower” while  Mark Pacella and Mary  Mitchell contributes the pencils for “Bane.”

P. Craig Russell returns to Elric in the late 1980s, to both write and draw an adaptation of Stormbringer, which was published as a joint effort between Dark Horse and Topps Comics.

Elric’s most recent comic book adventures are Elric: The Making of the Sorcerer, published by DC in four segments from 2004 to 2006 and Elric: The Balance Lost, published by Boom! In 2011. Moorcock scripted the first series himself, an original story from Elric’s youth, with art by Walter Simonson. Chris Roberson and Francesco Biagini were the creative team on “Balance,” with Moorcock listed as co-plotter.  I’m going to hold talking about “Balance” for a little bit, because it deserves more attention than I can give it here.

Next time, we’re going to take a look at the comics featuring some of the other Eternal Champions, such as Hawkmoon and Corum. (That’s my story and I’m sticking to it.)

A Carnival of One’s Own