In this week’s viewing: It’s that late-season moment when the plot cards are all on the table and fisticuffs break out in all directions! 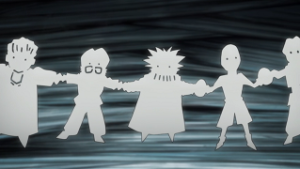 Hunter x Hunter #96 – The matchups are set! Gon and company are racing to take out the Chimera Ant King and his retinue! Now it’s time for… a switch to a completely different setting and characters!

Meteor City hasn’t been shown before, but it’s been mentioned several times throughout Hunter x Hunter going back to the very first story arc. It’s a town built on the accumulated garbage of uncounted nations, inhabited by a community which bonds on a common feeling of having been thrown away by decent society (sometimes literally). It’s the birthplace of many powerful Nen users, and the base of operations for the Phantom Troupe.

Of the six members visiting home this time, four have hitherto not been shown facing anyone powerful enough that they needed to even bother with special powers. This side story is a treat thrown to longtime viewers who want to learn more about one of the anime world’s favorite villain groups ever.

Of the new abilities on display, my favorite has to be Bonolenov crushing his opponent by summoning the awesome power of Gustav Holst. Classical music aficionados will of course have noticed that for this episode, the usual incidental music was supplemented with a minor-key variation on, yes, “Jupiter” from The Planets. Nice work there, music producer Shinya Yamada!

Gatchaman Crowds #10 – Finally we get to see the entire Gatchaman team in action together kicking some old-fashioned butt. I have nothing to complain about other than that ’70s throwback fight music getting stuck in my head for days.

I’m pretty sure I know by now what the Neo Hundred are a fictionalized version of. The signature masks, the Japanese lolspeak, the almost immediate splintering after the one big act of destruction is accomplished? Yeah, that’s got to be Anonymous. It goes along with Katze’s revenge on Umeda for being insufficiently committed to the cause being to dox him.

Here we also get to see the marvelously sophisticated Japanese disaster-preparation system, developed over many experiences with typhoons and earthquakes, springs into action. (See this post, written shortly after the earthquake and tsunami of 2011, for close-up look at just how sophisticated it is.) There is truly no nation on this planet better prepared to deal calmly and efficiently with invisible spectral monsters gallivanting through an urban center just as the Internet becomes unsafe to use. 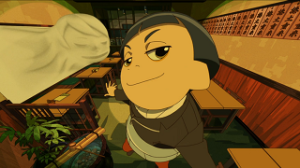 The Eccentric Family #11 – And the answer to who’s going to save the day now is: Benten becoming increasingly tsundere and Kaisei turning into an action hero.

All right, I need to explain “tsundere”. It’s a portmanteau of tsuntsun “aloof, morose” and deredere “lovestruck, mooning, flirting”. As that suggests, it’s applied to characters, almost always female ones, who are cold, hostile, or outright violent toward the male lead, but ultimately reveal a kinder side and turn out to be in love with him. Benten insisting that she isn’t doing this for Yasaburō’s benefit, she’s planning to eat whoever gets brought to the table, and she just needed an umbrella is absolutely classic tsundere. 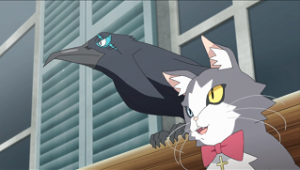 Day Break Illusion #11 – At last, there’s the philosophical debate between Schrödinger and Laplace. That turned out to be somewhat less epic than I’d hoped.

Which describes this whole series pretty well, at this point. It started off looking like an ambitious attempt to play off of Madoka Magica, but now it feels like it’s just floundering around inflicting random cruelty on characters in order to generate drama.

In that regard, the revelation of the special circumstances of Akari’s birth is a further disappointment. Part of the greatness of Madoka Magica was that Madoka wasn’t ordained to be special from the start; she became important because of what she did and what she inspired her friend to do.

Steve takes it easy this week with short reviews, award news and singing the blues. Okay, we’re kidding about the blues.