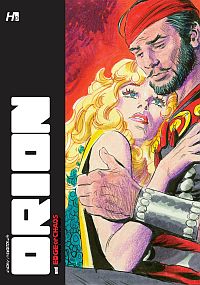 The late Gray Morrow was best known for his artwork, but he was a writer too. Two of the series he created, Orion and Edge of Chaos, have been collected into an oversized paperback, Orion, from Hermes Press.

Part of Orion appeared in Heavy Metal magazine in the late 1970s. but the entire story is published here, with some pages being reproduced directly from Morrow’s original art.  This is a light fantasy, in the tradition of the classic Errol Flynn movies and the Hercules and Xena television shows. The title character is an adventurer and the holder of the mystic sword Thorbolt.  Over the course of the story, Orion encounters various people who want Thorbolt, for various overlapping reasons.

Visually , this story is a treat. It’s a lushly constructed world, filled with lushly constructed women and creatures.  Some of the pages seem a little text-heavy to me, but in general the humor works well. One of my favorite bits is when Mamba, one of the main characters, is captured by a band of raiders. He advises himself to “ improvise, devise, revise, extemporize—and lie like you’ve never lied before!”

Despite the light touch, there are some genuinely eerie moments in Orion.  I particularly liked the scene where Orion discovers the abandoned ship and the party in his honor at the castle of Chandra, the villain of this story. 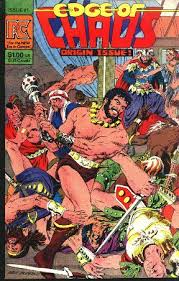 Originally, Edge of Chaos was a three-issue limited series, published during the early 1980s, the first expansion period of the comic shop system.  This story is influenced more by Flash Gordon and John Carter than Errol Flynn.  Eric Cleese, a modern CEO and all-around thrill-seeker (think Richard Branson or maybe Ted Turner), is drawn back through time to a pre-historic period on Earth.  In this period, the planet is also the home of extraterrestrials, who will become the inspiration for the Greek gods. (Yeah, you could call them ancient astronauts). These pseudo-gods want Cleese to stop one of their number, a renegade called Moloch, which will allow humanity to evolve independently.

This series was reprinted from completed comic book pages, so the reproduction isn’t as sharp as it is for Orion, but Morrow’s visual flare is still apparent.  With this mixture of mythology and pre-history, he can use both realistic and fantastic creatures,  with some super-science thrown in for good measure. And Cleese brings a modern perspective to the proceedings.  During one early bit of expository material, he says, “If you can explain all this, I’ll believe in Santa Claus, the Tooth Fairy and the intrinsic goodness of man again!”

Orion is available from Amazon and directly from Hermes Press.

In this week’s viewing: Everyone gets a flashback, but only Higurashi can manage a flashback to the future!

No Morning After by Arthur C. Clarke

After 42 years in space, Voyager 2 breaks thru the heliosphere