This is the story of two little girls.  They live down the street from each other, take the bus to school together, and are often mistaken for sisters.  They play typical little-girl games like Barbies and princess, but they also play less-than-typical little girl games, like Pokemon and Dragon Ball Z.  They wear glasses and Skechers.  They like cats.  One of them wants to be an archaeologist.  The other wants to be a hobo.

They will grow up to be two young artists trying to prove that you really can do what you love and be successful at it. 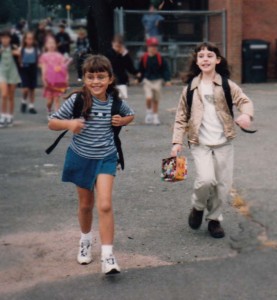 This is the story of my very best friend, Sara.  And this is also a story about why I owe her my position at Amazing Stories, albeit in a somewhat tangential way.

When I was seven years old, my mother, my sister, and I moved into my grandparents’ house.  Sara lived down the street, the central house in a cul-de-sac.  Our families knew each other a little bit, and she and I had actually gone to preschool together.  But it wasn’t until early elementary school that we would become inseparable.

Sara had an older brother who liked to play video games, so naturally she and I were exposed to Super Mario, The Legend of Zelda, Final Fantasy VII and a host of other video games (most of which were for the Nintendo 64, and then later on for the GameCube).  But we would also find our own little hobby in the then-expanding world of anime – starting with the American release of Pokemon in 1998.

The late 90s was a great time to start getting into anime, as more and more series were being licensed Stateside, with ever-increasing attention paid to dubbing standards.  Pokemon was the gateway drug – we played the Gameboy games, made paper Pokedexes, owned T-shirts, had PikaPets – to what would become a staple of our childhood and early adolescence.  The Cartoon Network had two separate opportunities to watch anime: there was the Toonami block during prime time (with such titles as Gundam Wing, Dragon Ball Z, and Yu Yu Hakusho), and there was the Adult Swim block late at night (Cowboy Bebop, Outlaw Star, InuYasha).  We watched the lauded anime film Akira in my grandparents’ basement in the third grade, praying that my grandmother wouldn’t come downstairs and see the brilliant psychological horror to which we were exposing our young minds.

Even from our earliest days, we would draw pictures celebrating our favorite characters (though I still think that my real drawing “career” didn’t actually start until the Gundam Wing phase hit in early middle school).  We would create our own characters and our own stories that somehow became enmeshed and jumbled in with all the fandom.  We made a website once, under the misguided notion that we were skilled and disciplined enough to co-author a webcomic (no, I won’t provide you with a link).  Even after Sara changed schools, we would talk almost every day and see each other every weekend.  When I moved out of town and high school crept upon us, we communicated less frequently, but the way we interacted never changed; the easy comfort of our relationship remained, even if our separation spanned weeks or months.

During the summer of 2004, right before we started high school, we attended the first-ever ConnectiCon.  I dressed as Kiki from Kiki’s Delivery Service, and the following year Sara dressed as San from Princess Mononoke.  And if you had to equate each of us to a Miyazaki girl, I think that those characters are the most in line with our personalities and our interests – and the kinds of stories that are important to us.  The last time I went to ConnectiCon, in 2008, Sara didn’t go.  And I haven’t been back since.

We went to different colleges for different things.  We made new friends and worked on projects we had never fathomed before.  We developed strong relationships with long-term partners.  There were long stretches of time that went between communication – years, in some cases.  But last week we Skyped, and it was once again like nothing had changed.  We had changed, of course – grown up, become more skilled, become more aware.  But we had changed in tandem, somehow, even being miles apart.  And one of the things we talked about, at great length, was anime and the culture surrounding it.

Sara attended Otakon a couple weeks ago.  Sara attends a lot of conventions these days, and you might know her by the name “Nobody,” as she is part of the Black & Nobo cosplay pair (you should check out her deviantArt and their Facebook).  Maybe you saw her dressed as Beatrice from the computer game Dante’s Inferno:

To say that her cosplay is incredible and inspiring is clearly an understatement.  And as much as I love what she does, I’m not surprised that she can do it.  I saw those early attempts at cosplay, and all subsequent attempts as well.  But this isn’t really about her cosplay; this is about her influence, and about how important it is to have a community of people who like the same thing – even that community is only two little girls.

So to the once-little-girl who used to write me letters in purple gel pen, who made stop-motion videos to Radiohead songs in high school, who is still in love with Spike Spiegel, who talks about postmodernism in anime, who loves cheese, who hates being tickled more than anyone on the planet, who chews her ice cream, whom I have only seen cry maybe once, who used to go ghost hunting to humor me, who made me promise we were still going to get an old Victorian house and too many cats together after I got engaged, and who has been the recipient of all my best friend necklaces….

To you, Sara: Happy Birthday.

(“You’re My Best Friend,” lyrics by John Deacon for Queen)