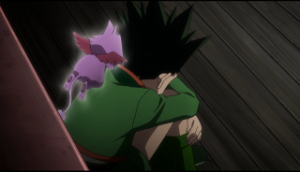 Hunter x Hunter #90 – Nodding to old sf tropes once again, the new Chimera Ant king is after both braaaaaaaains and our women. And he demonstrates how mustache-twirlingly evil he is by killing two henchmen before he’s five minutes old, although Neferpitou did have a point about how the king and the guards don’t need to show any loyalty to the existing colony, because they have to set out and start a different one.

Meanwhile, Gon gets a taste of being unprivileged. In the world of Hunter x Hunter, all that really matters, above race, gender, and class, is your Nen power. If you’ve got lots of it, the world is your oyster. If you don’t, it sucks.

But, to look at it another way, Killua gets a month’s reprieve from having to abandon Gon, as Biscuit told him he would have to if he lost his own fight. A month in which he gets one last chance to redeem his cowardice. A month in which our heroes may wind up thankful that they missed whatever terrible fate the plot has in store for Knuckle and Shoot… 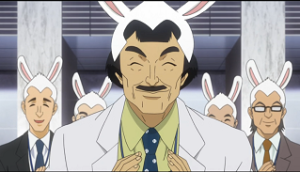 Space Brothers #68 – Now Hibito must pay a terrible price for one bad decision on his moon mission. No, not the moment of inattention which which nearly killed him and Damian, but rather his failure to think up something profound to say when he arrived, leading to his honest but inarticulate actual reaction to landing there and the inevitable viral video stardom. Now he must face a lifetime alongside Grumpy Cat and Rick Astley.

Rabbits and the moon have a long association in Sino-Japanese mythology, so it’s a very small step, err, a simple leap, um, anyway, Mr. Hibbit was just waiting to happen. (In fact, you’ll see this pairing a lot in anime. Some of you will remember Morel’s nighttime smoke rabbits from Hunter x Hunter a few weeks back, and if you take a close look at Luna’s magical girl outfit in Day Break Illusion, you can see that the hat includes rabbit ears.) 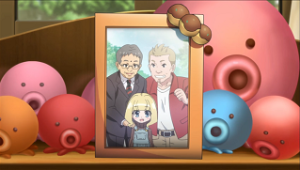 Day Break Illusion #5 – Well, there’s something you hardly see in teen-oriented fantasy: a parent who’s present, aware of magic, aware of exactly what his kid is tangled up in, approving of what she does, and even trusting all this hocus-pocus enough to carry magical protection and not hesitate to use it.

It all fits with the family power of Temperance, though, being the ability to act reasonably in the face of pretty much anything. It’s like having infinite sanity when surrounded eldritch horrors. It’s the power to halt overwrought melodrama. This is a power I wish a lot more fantasy heroes had.

Ginka’s octopus knick-knack obsession has now been explained by her backstory, if you happen to know that takoyaki are a spherical pancake-like food with an octopus filling. 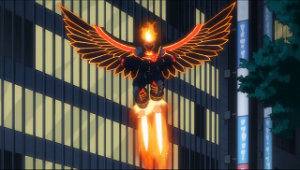 Gatchaman Crowds #4 – Welp, that’s it for Jō, isn’t it? We can presume that that mysterious gap covering the end of his fight means that he’s been cloned, recruited, or corrupted by J.J.’s opposite.

Jō is an interesting character, who I think is meant as a bridge to the earlier series. He’s got the only powersuit that resembles the original ones, and he’s been around a while, if he was recruited at a similar age to Hajime, Sugane, and all the characters in the original.

What we do know about him for sure is that he went to Tokyo University– the Japanese equivalent of getting your degree at Harvard or Cambridge– but then, instead of embarking on the sort of career that suggests, came back home to be a minor functionary at City Hall and spend his evenings moping, drinking, and playing darts. (If he is the same guy from the original series, let’s just say he’s got more than enough issues to justify it.) 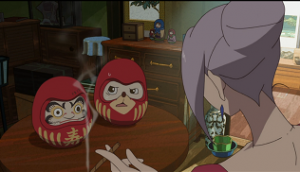 The Eccentric Family #5 – The Friday Fellows were founded in the Taishō period, which was 1912-1926. It was a time of social, political, and geological upheaval in Japan. The country was finishing an epic sprint to modernity by seriously debating a move to universal suffrage and parliamentary democracy. The Great Kanto Earthquake and ensuing fire destroyed whole swaths of Tokyo. One of the refugees from it was the author Junichirō Tanizaki, who moved south to live the rest of his life in the Kansai region, which includes Kyoto, so he might have been one of the founders.

The Fellows always have seven members, named for the Seven Lucky Gods, which finally explains Benten’s nickname (an alternate name for Benzaiten).

Daruma is the Japanese name for Bodhidharma, a 5th-century Indian monk who travelled to China and founded Ch’an Buddhism there. Later it would spread to Japan, where it became known as Zen. The Daruma in this episode is an idol made of paper-mache with a weighted bottom, representing the monk in the mythical tribulations he suffered, which are said to have included losing his sight and all of his limbs. They are made with blank eyes, and filling them in is believed to bring a person good luck.

By the way, I won’t able to make it to Worldcon this year, but I do have a special message for all you lucky people who will: Vote Spokane for 2015! It’ll help skew the voter base for the 2017 site selection in favor of Nippon 2017!