When I was just a little tyke, driving to Logan Airport in Boston meant, as today, enduring the unavoidable traffic jam. Conversing in the family car to pass the time was not an option since my dad didn’t handle being trapped in a tube under the Charles River very well. His trade-marked Summer Tunnel Ritual to punish the other drivers responsible for another fine mess they had gotten us into, rivaled that of Ralphie Parker’s dad in A Christmas Story, while my mom sat, red-faced, avoiding eye contact.

I chose, therefore, to amuse myself by taking in the sights.

Street signs taunted us with the unattainable “Speed Limit 40”, but a more interesting sight was that puzzling large bronze tablet, placed strategically under an overpass next to a toll booth, reading “The Professor Enrico Fermi Overpass”.

I knew that presidents got monuments and schools named after them, and sports heroes got candy bars like Baby Ruth. It was natural then that I wondered what heinous act this Fermi guy had committed to have his honorific bust relegated to a noxious parking lot in East Boston. Or perhaps he had merely starved to death in his car sitting in the unmovable traffic and city workers decided to bury him under a gravestone right there in the middle of a lane.

After repeated Logan trips,  “Who is Enrico Fermi?” gained the urgency of a mythic quest. I didn’t want to wait for the Jeopardy quiz gurus to enlighten me, and I didn’t dare interrupt my dad’s 4-letter tributes to ancient gawds to ask him.

In pre-internet days, it was the Encyclopedia Britannica that begrudgingly coughed up some answers. I happily learned he didn’t share kinship with a Sacco, a Vanzetti nor a Corleone, and more impressive things named after him — sub-atomic particles, an element, a branch of statistics and the Atomic Energy Commission’s highest award — co-existed with that ignominious section of highway where cars came to overheat and die and dads taught their children an expanded vocabulary.

Fermi first got spanked in Italy in 1901, became a brilliant physicist in America, and published groundbreaking work in quantum theory, particle physics and statistical mechanics. Since I didn’t know what any of that actually meant, it earned a bored “ho hum”. Heady stuff, it seemed, but still not reason enough to give him his very own Boston landmark.

Eventually I read he had been placed in charge of an elite group of scientists buried in a secret laboratory under a football field at the University of Chicago! This was The Manhatten Project, which, for those of you who have been living under a rock (like they were), resulted in the first atomic bomb!

Well, alrighty then! This was really big – and a secret lab and bombs got thrown into the mix, which promised exciting conspiracy theories!

During those Cold War years, kids knew lots about the atomic bomb! We knew the world would be turned into a radioactive wasteland by sentient computers playing War Games or by demented scientists like Dr. Strangelove taking their sexual frustrations out on some House for Wayward Wimmen in downtown Moscow. After the Big Ones fell, we’d only be able to leave our cellars to forage for whatever plants the giant mutated ant colony kindly left behind.

Much later, autobiographical works by others who had been part of Manhattan revealed personal details of Fermi’s life.

Like all Mensa-wannabes did as preteens, he sought to impress some bella donnes in short skirts by building a functional EKG machine in his home (yeah, like that approach has ever worked!). Still later, he used to challenge his staff with questions meant to exercise their brains and divert their attention from the seriousness of finding inventive ways to reduce overcrowding in Hiroshima and Nagasaki.

Fermi believed all scientists could use something mysterious called “order-of-magnitude estimation”, and by applying logical assumptions to a limited amount of data, come up with ball park estimates to solve virtually any pesky problem, even non-Physics ones.

He’d ask them seemingly nonsensical and unsolvable problems like “How many piano tuners are there in Chicago at any given time?” or “Are there more grains of sands at the beach than stars in the sky?”. I’ll skip the math presentation that would send all my readers running and screaming to another blogger’s site – just accept the fact that these methods worked! 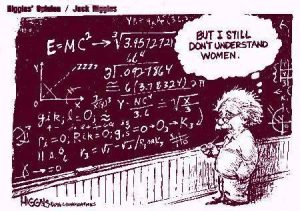 It was this anecdote that convinced me to become a mathematician! Oh, I didn’t really care how many piano tuners were making housecalls in the Windy City, but I desperately wanted to be able to guesstimate the probability of success with a particular redhead. I knew Fermi’s method and a dash of higher level math would help. Hey, it couldn’t hurt!

In 1950, Fermi was walking to lunch with other PhDs who cashed checks issued by the Los Alamos National Laboratory. While I could amuse myself in idle moments by simply reading street signs, these higher minds, instead of looking up and merely asking “think it’ll rain?”, would calculate the height, color, altitude and direction of any cloud and simultaneously open their umbrellas just seconds before a raindrop would ruin their blue suede shoes.

Conversation centered on an Alan Dunn cartoon that appeared in the May 20, 1950 New Yorker linking the recent spate of UFO sightings to the apparent disappearance of New York City’s municipal trashcans.

As physicists are prone to doing, instead of lining up all the usual suspects for the trash can heist, they steered the topic to a more serious discussion on the probabilty of humans actually making contact with extraterrestrials. While his IQ-challenged companions figured, oh, about one in a million, Fermi, applying his earlier methods, rapidly plugged a few estimated values into his calculations, and declared it was closer to one in ten!

Still considering the problem later through dessert, he suddenly yelled, “Where the hell is everybody?” (my dad’s more colorful vocabulary wasn’t acceptable at the Los Alamo Hooters, apparently).

UFO sightings today have dropped precipitously and is, predictably, inversely proportional to the number of cel phones with picture taking capabilities. The number of bosomy blonde bombshells actually kidnapped by marauding Martians with disintigrators is now down to no more than 2-3 a week — tops!

Though even ancient pyramid builders had pointed up in the sky and screamed “WTF!”, back when TV’s were a luxury item possessed only by the rich and famous and the rest of us were awaiting a radioactive candy gram from the gawdless Commies, anybody who was nobody declared they had seen a UFO. And, if you were really starving for attention, you got abducted.

Government investigators officially declared most of these sightings were either swamp gas or weather balloons. I personally subscribe to the theory that they were the result of some frightening combination of too much tequila and in-breeding.

Fermi had argued that a few billions years old Universe teeming with a gazillion stars should have produced more planets advertising romantic Earth getaways than there are flavors at Tom & Jerry’s – and our planet should have been visited long ago and many times over!

But since he was part of or privy to all top secret programs, he knew he hadn’t invented anything scaring airline pilots, and concluded anyone intelligent enough to cross billions of miles in space wouldn’t choose crop circles as their preferred mode of communication. The UFO sightings, therefore, could be dismissed. 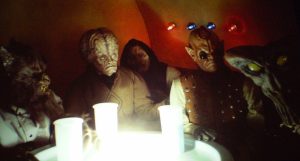 The conspicuous lack of non-Mexican aliens remains a glaring contradiction today, and is now called the Fermi Paradox. His calculations insisted your local McDonalds should resemble a Star Wars cantina, teeming with an assortment of butt ugly multi-limbed green slimey thingeys complaining about the price of fries.

Another physicist, Leo Szilard, decided he knew where the missing aliens were. “They’re among us,” he declared, “but they call themselves Hungarians.”

Sadly, Fermi’s investigations ended prematurely, when he died at the age of 53 in 1954 from cancer, the likely result of his extended exposure to radioactive material.

This left unresolved an even greater mystery that, even now, Google searches fail to resolve – — what really did happen to all those New York City trash containers that reportedly went missing? [I suspect partying councilmen from Poughkeepsie.]

As I begin writing this, it pains me that such a post is even necessary here in the early years of the twenty-first century, to a group that purportedly celebrates things like the future, science and reason. Maybe it’s because I’m getting older. Maybe it’s because I have a young daughter, and I don’t like […]