I can think of a lot of relatives to this particular menace, but none that work quite this way. Certainly you’ve got giant insects by the megaton in sf, and many stories about horrible mutant things that look kind of human but aren’t, and lots of variations on the alien queen who requires humans in order to breed. (In fact, Yoshihiro Togashi has tackled that last one once before, in Level E, where the alien invasion/breeding plan encounters unanticipated difficulties when the queen chooses a mate/victim with no Y chromosomes.) Can any of you think of a closer parallel?

In the meantime, the arc-opening continues with the start of a fresh shipment of characters, most of who, if Hunter x Hunter stays true to form, will die in the course of this story arc. Don’t get too attached… 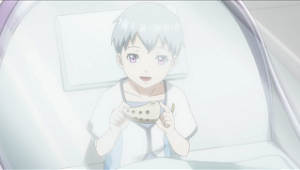 Gargantia on the Verdurous Planet #4 – Bebel’s question to Ledo is what the series has been building up to: what happens if he runs out of enemies to fight? What’s his purpose then? Is he capable of finding one when he understands “stand by” but not “stand down”?

Given the attitude Ledo’s civilization has toward the weak and useless, it’s a good bet that if they did ever defeat the Hideauze, the next order he got would be to report to the nearest crematorium. Or whatever it was he recalled the flute-making kid disappearing into. Was he or she ill, or just expressing the wrong programming by showing a talent for music rather than war?

Space Brothers #55 – A guy has his own life under such control like Vincent does was bound to turn out to have a secret like this: his own embarrassing, self-destructive brother. (Or boyfriend, or cousin, or old military buddy, for all we know. Okay, no, that’s probably his brother.) At least Team E has its own mechanical engineer on hand. For all that Mutta had failed at in the past, it was made clear in the early episodes that he was actually good at his second-choice career.

By now you may have noticed that practically every non-elderly white person in this show is blond, and may even be wondering what bizarre coincidence or futuristic explanation is behind that. Um…

As a general rule in comics and cartoons, visual representations of the majority ethnic group tend to be highly diverse, whereas minorities have standard exaggerated racial characteristics to make really sure you know that they’re part of whatever other ethnic group. If you look at Western comics, for instance, it’s not too hard to find ones which have peculiar ideas about Japanese skin color and eye shape. For the Japanese viewer, the racial signifiers for a white person are blond hair and blue eyes.

“But what about Larry?” I hear someone cry. I’m pretty sure he’s supposed to be Native American.