First, some big news for those of you in Spain and Portugal: Crunchyroll expanded its offerings for you as of May 9th. The specific list of shows involved isn’t accessible outside your countries, so I can’t tell you what to be excited about getting access to, but go have a look! 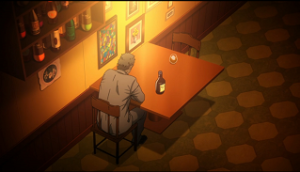 So first let’s pray to Vulcan, ugly god of forge and flame,
And also wise Minerva, now we glorify your name,
May you aid our ship’s designers now and find it in your hearts
To please help the lowest bidders who’ve constructed all her parts!

We’ve previously been introduced to how Brian Jay and two fellow astronauts died on reentry after their capsule’s parachutes became tangled. All the JAXA astronaut applicants who made it through the first couple rounds of selection were required to watch the never-publicized in-capsule footage leading up to the crash. The story of the politics and budget pressure behind it, which always seem to emerge in the wake of a NASA accident, is new.

Pico, being a clever guy, seems to have figured out a way to blame himself even though it isn’t directly his fault. How Vince got involved in this we have yet to see, but I suspect it’s that Vince hates to see Pico’s engineering talent going to waste.

On a lighter note, it’s good to see that in the year 2026, Home Depot will still exist and duct tape will still be an essential engineering supply.

Hunter x Hunter #78 – NGL is kind of Hunter x Hunter‘s version of the Amish, except for the part about being goddess-worshipping nature lovers and the ruling class being into drug dealing. (Hey! Are those guns biodegradable?? I thought not!)

As if one group of Chimera Ants working together wasn’t bad enough, now the human-derived ants’ interest in individual names signifies that they are slipping out of even their queen’s control. Or that the author has realized that it may get tedious having to refer to them as Turtle Guy and Hawk Guy and The One That Looks Vaguely Like a Penguin Or Something.

Gargantia on the Verdurous Planet #5 – Did the scriptwriter have a temporary attack of insanity the week this script was delivered? Did someone sneak something into the studio water? Did a producer panic that the show was seemingly getting too highbrow and demand some quick pandering to bring it down again? What, in short, happened after four superb episodes to make someone say, “Hey, let’s throw continuity out the window, put all the female characters in contemporary bathing suits and make them spend half the episode talking about dieting! And then have the male lead get chased by excessively amorous camp stereotypes! Because if there’s one thing funnier than body image issues, it’s sexual assault!”

Suddenly I’m glad I haven’t persuaded all my friends to watch this show. If it recovers enough to make it back on my recommendation list, it’ll come with a caution to please, please just skip this episode.

For anyone who feels that that was a harmless bit of fun and the preceding is unnecessary PC outrage, fine, here are my geeky science-based reasons for why it’s terrible. First, societies with few excess resources (and with Gargantia’s population density, it has to be running close to the edge of what it can handle) tend to see obesity as the ideal body type. Second, given what it’s supposedly capable to standing up to, Chamber’s skin should not absorb or radiate heat in the manner of ordinary material. Third, I get the bowels of the ship being the low-rent district, but the last place you want to be putting a foundry, with all its excess heat and toxic alloying substances, is in the hardest place to ventilate. You’re welcome.