Hunter x Hunter #76 – Hunter x Hunter was previously adapted for TV in 1998-1999 for a series that ran to the middle of the Yorknew City arc and stopped. Various direct-to-video continuations (none of which made it further than Asia) moved it along in dribs and drabs over the next few years to the end of Greed Island. When this new adaptation started in 2011, HxH fandom was happy to have a show that was reportedly much more faithful to the original manga, but what got everyone truly excited was the possibility that this one might make it into new territory.

So here we are, finally, after certain segments of fandom have been fully amped up about it all over various forums and blogs for over a year and a half. This had better be good, Internet.

With the new story arc, we get a new palette, new opening and closing sequences, and… the same opening song? Hunter x Hunter has actually had the same opening song since the start of the series, with minor modifications from time to time. Most series would be changing it every season or two, but HxH has such a large guaranteed viewer base that it can act like it’s special and doesn’t have to follow the rules.

It’s a sort of a recap episode here, including a scene from Gon’s earlier life which appears at the very beginning of the manga but was never shown in the current series before, and which online HxH fandom has also been banging on about since this series started. Although Ging has eluded Gon again, his presence dominates this episode. Was Greed Island really constructed exclusively for Gon’s benefit? If so, does it get rolled up now? It might be a kinder fate than letting it fall into the cycle of wimping which overtakes so many games once someone has solved them. 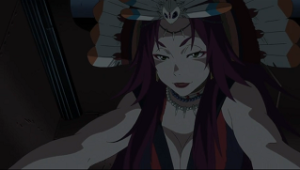 Gargantia on the Verdurous Planet #3 – The pirates are descendants of Marines, then. (Yes, according to a reputable source, “gung ho” also was a Marine slogan.) It could be that this is emblematic of the transition that Ledo is going through– where he once fought as part of an organization dedicated to violence, now he’s fighting against one, and learning to take a more thoughtful approach thanks to Bellows’s big-sister-style lecture on appropriate force.

Or it could just be that the scriptwriters wanted to throw in something exotic-sounding.

Anyway, it’s moving fast. Already the biggest threat Gargantia has ever faced has been easily dispatched (unless they forget to retrieve the Pirate Queen’s body, in which case she will, naturally, turn out to have improbably survived to fight another day). Which means: either something nastier is coming along very soon, or the rest of the series is going to make an abrupt switch to slice-of-life drama.

Space Brothers – Owing to scheduling changes behind the scenes here, the Saturday Space Brothers showing will now be too late to include in a post the day after. So just imagine that the third recap episode mentioned last week is actually covered here with a doom-laden rant about the sorry state of the anime industry and its imminent decay into an undifferentiated primordial ooze incapable of really creating anything. Next week, back on track!