Over on my own blog I wrote about eight science fiction tropes of convenience, mainly about unlikely or impossible technology or assumptions that are made not because they make sense, but because they’re convenient for readers or viewers.  Things like artificial gravity on ships, universal translators, super-powered sensors that can detect a sparrow falling light-years away when necessary for the plot.  Usually the story doesn’t hinge on these points and they’re conveniences and could be written around if necessary, although perhaps awkwardly.

It made me think of some movies and TV shows that had elements so illogical that the whole story, or a major part of it, falls apart if you think about it too hard.  A few of this attempted retcons in sequels or later episodes to fix the premise, but too late for my tastes.

Here are some of my favorite silly science fiction premises.  Warning: some SPOILIERS below.

1. Aliens travel across light-years of interstellar space to conquer a planet totally deadly to them by skulking about in the dark.  Signs of course.  Normally we consider water a necessary element for life, not deadly to life.  Well, duh, aliens, right?  So even if we allow for some bizarre chemistry and evolution where this makes the slightest sense, why would such an alien race go to the trouble of interstellar travel to conquer a planet covered in the deadly stuff and where it rains?  And where the native children are armed with water guns?  And they can’t even be bothered to wear raincoats?  And they want to settle down in cornfields rather than the Sahara desert where they could coexist with us water-loving beings?

2. Aliens travel across light-years of interstellar space to steal our water.  The original V mini-series was guilty of this.  It makes a lot more sense than water being a deadly acid, I guess, but is still illogical.  There are lots of other ways to get water that are easier than traveling to another star system and creating an elaborate plan to dupe an entire civilization.  Europa has as much or more water than Earth, and you can also just harvest a few comets present in your own star system.  Hell, given the energy requirements of interstellar travel, why not just make your own water from energy?  That’s about as plausible.

3. Aliens travel across light-years of interstellar space to harvest us as food.  The original V mini-series was guilty of this, too.  There are lots of other ways to get food that are easier than traveling to another star system.  Heard of farming and ranching?  Well, I guess if you want food AND water this suddenly makes a lot more sense?  Nah….  And anyway, I don’t think it’s very likely, and do believe it’s impossible to predict in advance, that humans would be nutritious and tasty and not poisonous to aliens.  Although “To Serve Man” does deserve it’s place in legendary Twilight Zone episodes.

4. Aliens travel across light-years of interstellar space to conquer Earth but have computer systems so simple they can be hacked in minutes using a Mac Powerbook.  Independence Day here, of course.  I was on a panel at Dragoncon last year and actually had a well-known science fiction writer defend this as being very plausible, with which I could not disagree with more.  Let me give you a Mac Powerbook and a computer system in an alien language at least generations different (even if our tech is derived from the tech of their Roswell era flying saucers) and you hack the entire thing in minutes.  They could have at least gotten the Chinese military to do it rather than Jeff Goldblum if we wanted more plausibility… He didn’t seem to understand chaos theory very well in Jurassic Park, either.

5. Aliens who created us leave directions to their secret weapons facility and want to kill us when we follow them there thousands of years later and wake one up to have a chat.  Prometheus.  A more recent entry, and one in which the logical inconsistencies drive me crazy.  If you treat it as a horror movie that makes no sense but has scary scenes, it’s okay.  If you treat it like science fiction, well, you can’t with a straight face.  The apparently competent guy who maps the alien complex gets lost, for starters.  But just looking at the premise, it’s a non-starter.  The constellations wouldn’t be stable over the time periods shown to give us the map without doing a lot of computational tricks, and…hell.  Just check out my list of criticisms and this video.

6. Robots keep humans around for energy and create a simulation to keep their minds occupied.  The Matrix was guilty of this.  First, I don’t know why you can’t just drug the humans — you can still feed them and get their waste heat for power.  Or keep them chained up.  Why make the matrix at all?  And even if you think that makes sense, if you can produce the food to feed them, or any other animal that can produce heat and electricity when fed, you can just create your own fuel.  Feeding dead humans to the living humans doesn’t solve the energy equation.  Granted, the movie allows for “a form of fusion” in the voice over in the key scene, which leads me to believe they don’t need the humans at all.  Maybe they’re just cruel or sentimental, or following a grand argument to be made in the sequels, but as a stand alone, the explanation makes no logical sense.

7. Enemies of humanity have time travel capability and somehow fail to win before the movie starts.  Terminator 2 and Star Trek: First Contact, among others, are guilty here.  In the sequel to The Terminator, why does Skynet not send an assassin even farther into the past?  By sending one later into the future, Linda Hamilton has time to become a total badass and train her son to boot.  It would have been easier with a little girl Sarah Conner.   And in the case of the Star Trek movie, we see that the Borg can casually go into the past and assimilate an entire planet essentially instantly.  Why isn’t the whole freaking galaxy already Borg?  Look, I think time travel is really hard to handle logically as a scientist or a writer, and there are some who manage to do it well, but far too few.  And there are a lot of ways to screw it up.

8. A time travel movie invokes the Butterfly Effect and then violates it completely.  OK, huge spoiler here, but the last movie I saw that did this was Hot Tub Time Machine.  I’m going to forgive this surprisingly funny comedy, but this idea makes the suspension of disbelief hard to hold in slightly more serious movies like Back to the Future.  Look, here’s how the Butterfly Effect works.  You go into the past and any single tiny change at all changes the entire frakking future.  It’s totally different!  Not a little different.  Totally different!  Invoking the Butterfly Effect and trying not to change the past are inconsistent ideas.  The past (and hence the future) is changed once you’re there and do the slightest little thing differently.

9. A comet hits an asteroid the size of Texas and knocks it into a collision course with Earth.  I must mention Armageddon.  The idea that objects in space can collide is okay.  The idea that asteroids can hit the Earth is okay.  But there’s only one asteroid (Ceres, now classified as a dwarf planet) out there close to the size of Texas and it sure doesn’t look like the weird thing in the movie.  Moreover it takes a lot of energy to change the orbit of what is properly a dwarf planet, and I’m not sure there have every been any comets seen capable of doing this.  In the movie we’re also told that only a handful of telescopes are capable of seeing the threat when any pair of binoculars could do it, and the collision itself would likely be visible in daylight.  Then there’s the bit about splitting the asteroid in two with some nuclear weapons exactly 800 feet deep — but remember we’re talking an object “the size of Texas.”  Can you split Texas by blowing up some nuclear bombs just inside the state’s border?  No, you can’t.  Others have gotten more quantitative, but this just fails the bullshit test from word one. 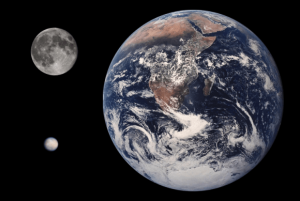 10.  The Earth’s core stops spinning, we lose our magnetic field, and deadly microwaves wreck havoc.  Let’s finish with the other ridiculous stinker, The Core.  Again, energy is a concern, and I don’t see humans anywhere close to doing anything capable of stopping the Earth’s core from spinning.  And even if we did, nuclear weapons don’t have the energy to spin it back up again.  And then there’s the thing with the magnetic fields and microwaves…microwaves are just a form of light and well absorbed by water and water vapor (which is why there’s a greenhouse effect and your microwave oven works).  They go right through magnetic fields!  There’s a lot of dumb in this movie and it started my head spinning, which generated a magnetic field to protect me from melting, thankfully.

There are other illogical premises out there, like human and aliens being able to mate and have children without technological assistance (I’m looking at you Mr. Spock, and the Next Generation retcon doesn’t make sense either).  I like some of these movies and hate some of these movies, but I can smile at all the premises and shake my head.  What are your favorites to snicker at?