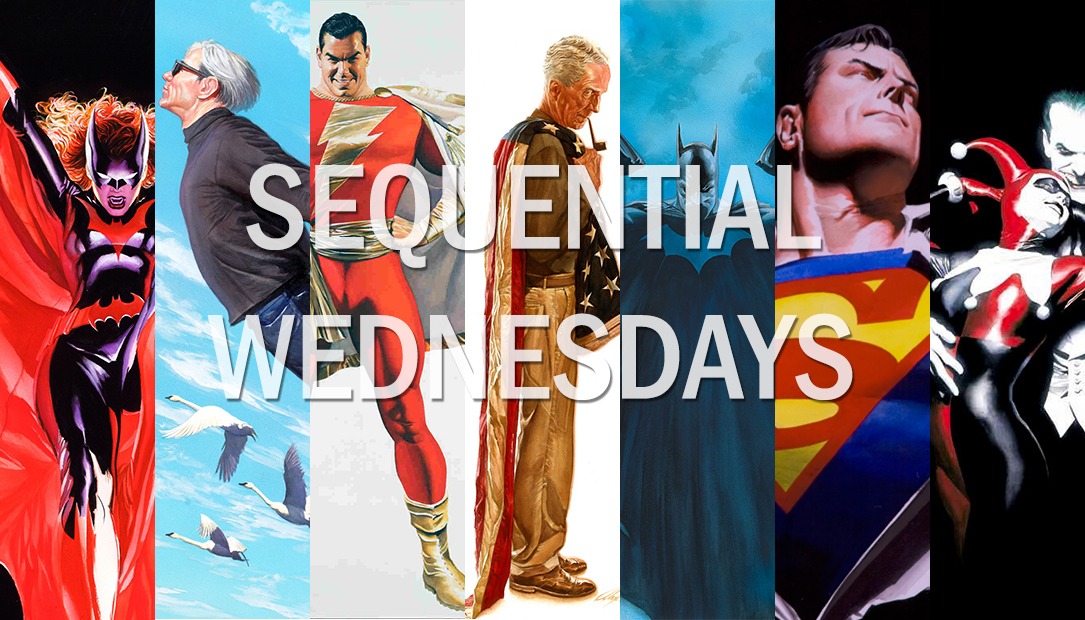 Let’s get one thing straight: I go weak at the knees because of some colored pigment on a stretched cloth surface – often and regularly.  Somewhere I know my parents got it right by taking me repeatedly to art galleries because like Pavlov’s pooch, give me a Rothko painting from his late period and man, do I drool.  However, I’ve realized that my tastes of sports ball have grown beyond tortured European gents and have rampantly expanded into comic artists.  I don’t really differentiate comic artists with “high” artists who have work exhibited in prestigious galleries and museums anymore.  Perhaps, I think to myself, the only difference between Alex Ross & Caravaggio is time.

I adore Alex Ross’s art, there’s no way around it.  Kingdom Come was the first comic I proudly discussed in public after my personal resurgence into the world of sequential imagery.  I happily blathered on, fueled by my interest and background in Art History, about Ross’s painterly style and genuine ability as an artist.  In the same way he portrays superheroes in a proud way that hadn’t been seen in many years, I shed my apprehensive shell and found the sunlight of pure enjoyment.  To top it all off, like any good comic: the story was brilliant.  In fact, it was fairly groundbreaking.  It portrayed a possible future in the DC universe where the classic/traditional Justice League hangs up the cape after a younger generation of powered humans appear and beginning winning public favor.  However, with so many caped vigilantes running amok without the understanding of responsibility thrust upon heroes and no more older role models soaring, all of Earth is pitted into a decisive war to protect all.  The majority of the story is told from the perspective of an elderly minister named Norman McCay, who upon receiving apocalyptic visions, is visited by the justice-seeking character, The Spectre who enlists Norman as his moral compass to aid in the judgement of the coming days of the very end for humanity.

The story was far more than a lovingly crafted tale of heroism and exemplification of the mythologies held in the comic world, but it was a much-necessary deconstruction of the then current state of mainstream comics during the late 80’s to late 90’s, often called the Dark Age, which focused on much gritter storylines riddled with graphic violence, rewritten characters, brooding attitudes, deviancy to the extreme, and a whole lot of sex appeal .  Not that this is a negative thing.  The Dark Age (or Bronze Age) saw huge innovating feats in the comics world and the birth of many characters and series that endure to this day.  However, the tearing down of loved characters so that bleak and self-destructive narratives could be build around them became such a strong trend in DC and Marvel that many readers felt abandoned by the very heroes who gave them strength.  Ross’s work was an early balm that helped steer the comics into what is called widely called the Modern Age which is the era of comic publication we are currently in.  To put it in the most succinct of words, the Modern Age asks the question: “do you want to watch them fall or see them soar?”  And how we soar.

Suffice to say, Alex Ross has helped redefine comics as a genuine and proud medium in the world at large and has worked tirelessly to forward that agenda.  I was fortunate to view a large array of his work at the Normal Rockwell Museum in western Massachusetts.  It was somehow very fitting to see his work on view side by side with the paintings of Norman Rockwell, widely considered the iconic American artist.  Not only to their styles blend suitably (Ross has often stated that Rockwell’s style deeply influences his own), the candid optimism and spirit of togetherness found in both artists is unmistakable.  Both are clearly artists with a deep sense of what it means to be an “American artist”.  Ross’s work is, for me, the ultimate portrayal of how to defend comics as art because I have absolutely no need to belabor the point – I simply let his work speak for itself.  That’s all from me for this week (probably), thank you for reading.

As a quick aside, I would like to promote an upcoming online college course called “Gender Through Comic Books” taught by Christy Blanch.  You will get to see open discussions by Mark Waid (Kingdom Come), Brian K. Vaughan (Saga), Scott Snyder (Batman) Matt Fraction (Hawkeye), Gail Simone (Secret Six), and many more creators talk about their work in relation to the subject of the course.  It’s an unbelievable opportunity and it’s freely available to all. There is no need to be a college student to take part.  For more info, head over to Mark Waid’s post.