The funny thing about movies is that liking or disliking them can become as political a process as anything else.  In fact, sometimes I get a pretty strong sense of whether a movie will do well not only before I have seen it, but before anyone has seen it.  I don’t mean I know whether the movie will be good or not, I can just tell that the potential audience has already made a decision.

The remake of the The Day the Earth Stood Still was definitely one of those movies which was judged before it reached the screen.  I think it had some redeeming value.

The movie had several things against it, one of which was Keanu Reeves.  Although he’d been a big star for a long time, lately more and more people had been complaining that he played every part the same and didn’t seem to have any acting ability.  The funny thing about Reeves is that the only role that he ever showed any range in was Bill and Ted’s Excellent Adventure, a silly comedy near the beginning of his career.  I’ve always thought he and others like him might not have developed as actors simply because of the sort of parts Hollywood offers them.

It’s accurate to say that Keanu Reeves doesn’t add much to his roles, but I think we should remember that very few Hollywood “Stars” display much acting ability.  A lot of good movies have been produced with a big name Hollywood star who never so much showed a hint of emotion.  In a sense, his problem was that he was too successful for too long and people began to notice his limited range too much.  Sometimes I think about Harrison Ford’s career, and I wonder how somebody can earn so much money for doing so very little.

The more serious problem was that Hollywood was repeating a sin it has committed many times.  They had purchased the rights to a movie and presented what they were producing as a remake, when it was really a new movie.  Probably the best example of this is “I, Robot.”  You will find no similarity between this movie, and -any- of the works of Isaac Asimov, the author of the book.  They simply wanted some name recognition, so they purchased the rights from the author’s descendants   The author had already passed away and had no input on the matter.

The most amusing thing about “I, Robot,” was that it was about an incident where as a group, robots we created attacked all of civilization.  In Asimov’s books, the robots were the good guys, and would never attack their owners under any circumstances.  His name was attached to a movie he likely would have disliked.  He certainly never wrote anything like it.

The Day the Earth Stood Still is considered a classic work of Science Fiction and still has many fans who resented the fact that this remake was made, and didn’t think there anything about it that needed to be fixed.  I am one of those people.

The original movie was responding to one of the issues of the day, the fear of war.  An alien landed his starship on our planet to make first contact, and a soldier panicked and shot him when he raised his arm.  Eventually, he manages to deliver the message that he had come to deliver, which was that his race had been aware of us for some time and had ignored us up to that point, but finally decided to speak to us because we were beginning to develop.  Up to that point, our constant warring was only our own problem, but since we were now building rockets that allowed us to travel in space, our constant bickering and warring was becoming a concern to them.  He warned us that our internal feuds were our own problem, but if we brought our endless conflict to the stars, we would become a problem to them as well, and if that were to happen, then we would be dealt with. 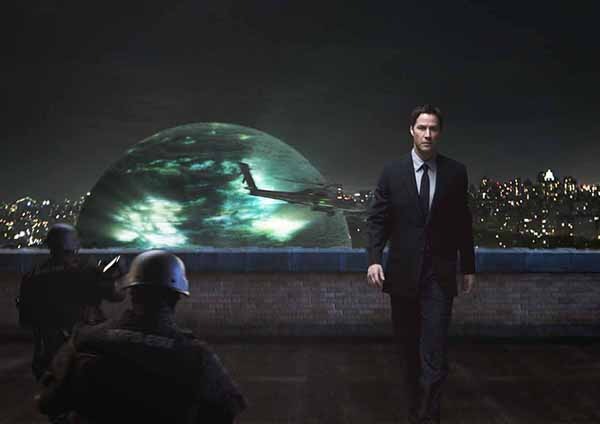 The new movie of the same name benefits from being made today in that the special effects are a lot more impressive.  Keanu Reeves plays the alien who comes to Earth, and he plays a character who is supposed to come across as intellectual and detached which fits his style pretty well.  Jennifer Connelly is very well cast as a woman who essentially has to plead humanity’s case with an alien who isn’t thrilled with out progress as a civilization.

This time the alien’s ship crashes and the visitor is taken by the United States.  He tells them that he wishes to speak to the UN, and he is told they won’t let him.  I liked the conversation that the alien had following being captured because it was well written and went very much to the point.  At one point, the US Secretary of Defense played by Kathy Bates tells him that “Earth is our planet,” and he replies, “No, it is not.”  She reacts very badly to that statement.

There are of course, two ways to interpret what he said, the obvious way and the less obvious one.  One might be that they are planning on taking the planet away from us, but then there is the correct way, which is that he is saying that the Earth isn’t a possession, and humanity does not have the right to just do anything they want with it.

The reason the alien came in this version is that they fear we will destroy our environment.  Since Earth is one of very few planets in the universe capable of sustaining life, he came to warn humans that if they continued to destroy the environment, then his race was ready to destroy humanity to save the planet.  When he is not allowed to speak to the world’s governments, the purpose of his journey changes and becomes darker still.

I never really wanted this remake to be made myself, but after watching it I actually wish that more people had seen it.  A lot of movies made under the Science Fiction “umbrella” don’t really deserve the title because they are about special effects, and not ideas.  I thought this version of The Day the Earth Stood Still was a worthwhile one to watch.  Fortunately it’s cheaper to see it now that it’s beyond it’s initial launch date, and there are plenty of places to find it.

What SF Means To Me

In this week’s viewing: A nice tidy end to the season with four finales.

In this dark science fiction thriller, a young woman must confront her past so the human race will have a future.