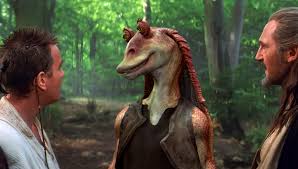 It might well have been the most disappointing event in science fiction history.

It was a mess of a film, with poorly drawn characters, no clear protagonist, infuriating comic relief, and some baffling storytelling choices. The ground-breaking visual effects and wonderful music score could not save it.

A whole generation has grown up since that event. It may be difficult for them to appreciate how excitedly, and how confidently, fans had awaited what was sure to be George Lucas’s next triumph.

There had been years of speculation about the prequels. Lucas had been talking for quite a while about returning to finish the series that he had put on pause in 1983 and, in the mid-1990s, it became clear that he really was going to do it.

When the real casting choices were revealed – Liam Neeson, Ewan McGregor, Natalie Portman, Samuel L. Jackson, Terence Stamp – they were exciting indeed. And George Lucas himself was directing his first film since the original 1977 Star Wars.

In those days, we had never seen a bad Star Wars film. (We could argue about the flaws in Return of the Jedi, but it delivered the goods on an action level.) And we had never seen George Lucas direct a bad film. By helming only three, he had kept up an extraordinary batting average.

By the time The Phantom Menace came out in the US on May 19 1999, there were some fans who had been queuing for a month.  In retrospect, we can see there were warning signs. At the Coronet in San Francisco, a cast and crew screening was held a week before the release. As Chris Taylor notes in his book How Star Wars Conquered the Universe, the fans camped outside saw Francis Coppola come out of the screening and take a half-hour cigar break, despite the fact that his daughter Sofia was in the movie he was missing. “I’ve seen bits of it before,” he said. 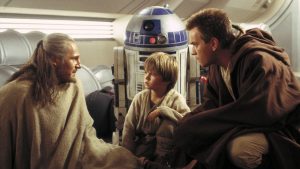 When the first audiences were finally let in, they waved lightsabers in the air as the 20th Century-Fox searchlights appeared on the screen. The Star Wars logo filled the frame to the familiar blast of music from the London Symphony Orchestra .. and then it all started to go wrong.

“Turmoil has engulfed the Galactic Republic,” began the opening crawl. “The taxation of trade routes to the outlying star systems is in dispute.”

Taxation of trade routes to the outlying star systems?  What kind of a set-up is that for a great space adventure?  What deadly peril will come next?  Will the galaxy be plunged into conflict over social security contributions?

For all its inventiveness, what followed was baffling. The comedy battle droids who say “Roger roger” and “Does not compute”.  Jar Jar Binks, the dismally unfunny pratfalling amphibian.  The procession of good actors giving dull performances. That bizarre accent Natalie Portman was doing as Queen Amidala.

The characters were all under-developed, and it was difficult to know who the hero was supposed to be. The underwritten Qui-Gon Jinn? The similarly bland Obi-Wan Kenobi? Or the future Darth Vader, who is eight years old and about as full of menace as Shirley Temple?

The story was strangely directionless. Our characters spend ninety minutes getting from the besieged planet of Naboo to the Imperial capital of  Coruscant, only to turn around and go home.

Lucas seemed to be struggling to find a convincing back story for his original trilogy. We had been told before that C3PO and R2D2 had a succession of owners before Princess Leia. This idea had clearly been abandoned, because now we learned that the young slave Anakin had, for some reason, built himself a protocol droid that can speak six million languages.

And then there was the Force. Previously, it had been some life energy that everybody could tap into. Now it emerged that some people were born with an affinity to it, thanks to microscopic organisms called midi-chlorians in their bloodstreams. Greatness was now a matter of heredity – especially in the case of Anakin, who we learned was the product of a virgin birth. 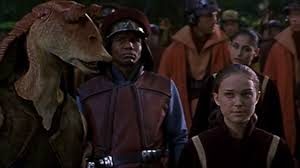 The Phantom Menace had great, ground-breaking visuals. The scenes of the Trade Federation tanks advancing through the Naboo city of Theed  are unsettlingly reminiscent of the Nazi occupation of Paris. Coruscant, a planet of one giant city, is an impressive sight which could have come from the 1936 Things To Come.  What’s more, there are great action sequences, including the pod race with its debt to Ben-Hur, and the climax is undeniably exciting.

But ultimately, Episode I has a lot of problems that could, perhaps, have been fixed if George Lucas had been forced to rewrite it, the way he had rewritten the original Star Wars several times.

Still, looking back two decades later, I wonder whether some unwelcome trends began with the fan reaction to the film.

It was the first huge genre movie to be extensively debated online, with fans in news groups splitting into “gushers” and “bashers” as they raged at each other. There was some nasty criticism of Ahmed Best and Jake Lloyd, the actors who landed what should have been dream roles as Jar Jar and Anakin.

George Lucas himself was subjected to some seriously over the top criticism. He had made a weak film, but that did not merit him being denounced later in a song called ‘George Lucas Raped My Childhood’.

The Phantom Menace was a misfire, but I fear a lot of people – me included, probably – lost their sense of perspective about it. And in the ensuing twenty years, fan debate has only become more overheated and toxic. That’s a shame – because if the release of The Phantom Menace teaches us anything, it is surely that we can be hugely disappointed by a film yet survive the experience and get on with our lives.

The Goddesses Are the Future: The Never Tilting World by Rin Chupeco