Fandom and Food in book form. That’s like, a good match for the holidays! 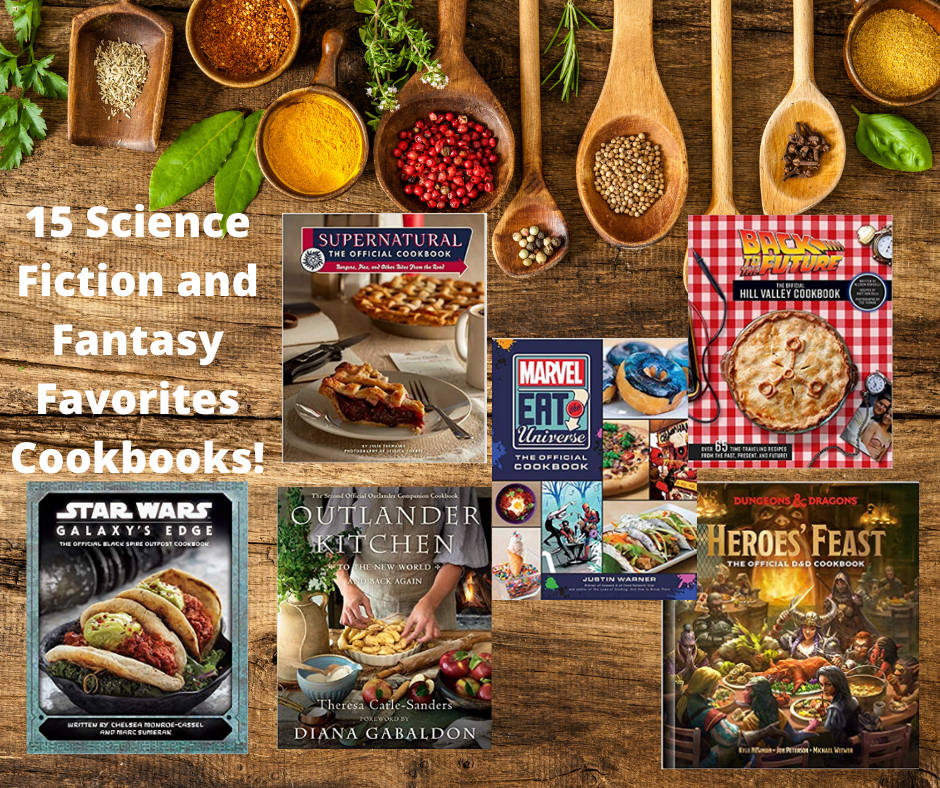 Note: This post first appeared in the Roswell Daily Record. New material has been added.

This time of the year, my thoughts turn to big feasts and special dishes. Sadly there won’t be those big family gatherings of yesteryear due to the pandemic, but it’s still fun to think about food and fellowship. (Second breakfast anyone?) Since I write scifi, fantasy and paranormal romance, I particularly love cookbooks based on recreating actual dishes or possible dishes from movies, TV shows and novels in the genre.

Here are a few to consider for this holiday season! 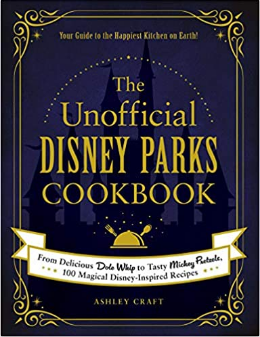 I’ll start with a gastronomic tour of the one and only Magic Kingdom: The Unofficial Disney Parks Cookbook: From Delicious Dole Whip to Tasty Mickey Pretzels, 100 Magical Disney-Inspired Recipes (Unofficial Cookbook) by Ashley Craft. Here’s part of the blurb: “Stroll right down the middle of Main Street USA, journey from Adventureland to Infinity and Beyond at Pixar Pier, and explore every avenue in between to taste the flavors of the Disney Parks…all without leaving your kitchen. With The Unofficial Disney Parks Cookbook you can bring the magic of Disneyland and Walt Disney World snacks and treats right to your home. Recreate favorites like the classic Dole Whip and Mickey Pretzels to new favorites like blue milk from Star Wars land and Jack Jack’s Cookie Num Nums from Pixar Pier.”

Sounds appealing to me and is especially timely right now when the original Disneyland is still closed due to COVID-19. 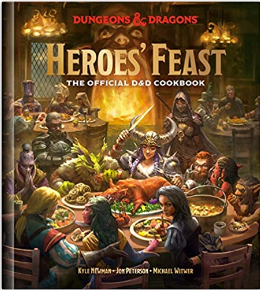 Know anyone who is an avid Dungeons and Dragons player? There’s a cookbook for them: Heroes’ Feast (Dungeons & Dragons): The Official D&D Cookbook by Kyle Newman, Jon Peterson and Michael Witwer. The book contains 80 recipes prepared by a professional chef, which will allow you to sample “…Elven Bread, Iron Rations, savory Hand Pies, and Orc Bacon, as well as hearty vegetarian, meaty, and fish mains, such as Amphail Braised Beef, Hommlet Golden Brown Roasted Turkey, Drow Mushroom Steaks, and Pan-Fried Knucklehead Trout—all which pair perfectly with a side of Otik’s famous fried spiced potatoes. There are also featured desserts and cocktails—such as Heartlands Rose Apple and Blackberry Pie, Trolltide Candied Apples, Evermead, Potion of Restoration, and Goodberry Blend…”

For a different kind of gamer, there’s The Unofficial Legend Of Zelda Cookbook: From Monstrous to Dubious to Delicious, 195 Heroic Recipes to Restore your Hearts! By Aimee Wood. The recipes include vegan and gluten free offerings and reveals the origin of various dishes in the game guides.

The Hallmark Channel is the perennial purveyor of holiday stories (many of which contain a fantasy or magical element) and never fear, there’s a cookbook for this as well. Hallmark Channel Countdown to Christmas: Have a Very Merry Movie Holiday by Caroline McKenzie sets forth 45 recipes, photos and behind the scenes accounts of the movie making for a variety of the classic films, with contributions from actors, actresses, crew members and craftspeople as well. The participants share personal holiday recipes, ideas on gift giving and more. I want to try Lacey Chabert’s sweet potato pie myself. 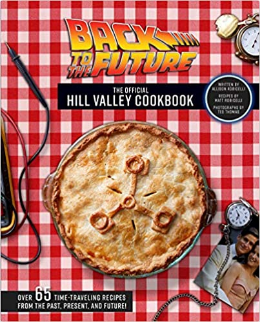 One of my personal favorite scifi trilogies are the Back to the Future movies. Back to the Future: The Official Hill Valley Cookbook: Over Sixty-Five Classic Hill Valley Recipes From the Past, Present, and Future! By Allison Robicelli offers notes from characters, everything from 1950’s diner cuisine to the movies’ version of 2015 pizza, and even includes a few recipes from the 1885 trip in the third movie. There are alternate ingredient suggestions, which may be quite helpful with those dishes from the 1800’s, I’m guessing.

Marvel Eat the Universe: The Official Cookbook by Justin Warner is for comic book readers of all ages, with 60 recipes inspired by various aspects of the Marvel universe, at various skill levels. Dishes mentioned range from Green Goblin Pumpkin bombs to Hulk Smashed Potatoes.

If I ever made it to Middle Earth, I’d be an Elf (never mind I probably look more like a hobbit here on our Earth) but with Recipes from the World of Tolkien: Inspired by the Legends by Robert Tuesley Anderson I could sample all the cuisines. This unofficial cookbook divides the day into six mealtimes (so maybe I’ve found the secret of that second breakfast) and uses modern ingredients, techniques and measurements. There are a lot of intriguing possibilities here, given the way the book is set up. You could mix and match and have an Elf/Hobbit/Dwarf potluck. 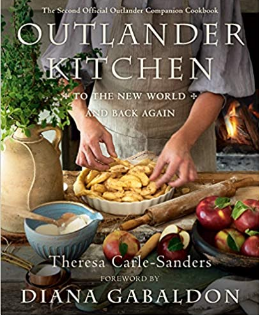 A shorter journey, if no less confusing, might be to the world of the Outlander novels and TV series. Outlander Kitchen: To the New World and Back Again: The Second Official Outlander Companion Cookbook by Theresa Carle-Sanders and Diana Gabaldon (Foreword) contains 100 recipes with this description: “…recipes herein are a mixture of authentic old-world receipts from Scottish settlers, new-world adaptations inspired by the cuisine of indigenous peoples, and humorously delicious character-inspired dishes…”.  A sampling of what’s inside includes: Mrs. Figg’s Flapjacks; Simon Fraser’s Grits with Honey, Sardines on Toast for Lady Joffrey, The Cheerful Chicken’s Poulet au Miel Pork Tenderloin with Cider Sauce and German Fried Potatoes; Tobias Quinn’s Colcannon; Fried Plantains; Corn Bread and Salt Pork Stuffing and Mistress Abernathy’s Apple Pandowdy. Other content includes information on preserves, condiments and cocktails.

I liked the idea of this next cookbook, which spans quite a range of possibilities and holidays. A Literary Holiday Cookbook: Festive Meals for the Snow Queen, Gandalf, Sherlock, Scrooge, and Book Lovers Everywhere by Alison Walsh includes 17 full four-course holiday meals from 25 classic books—each including an appetizer, entrée, side dish, and dessert. A sampling of dishes includes Mouse King Cheese Bites and Sugar Plums from The Nutcracker for Christmas and Deviled Raven Eggs, Coffin Pizza Pockets from Edgar Allen Poe for Halloween and The Queen of Hearts Tomato Tart. 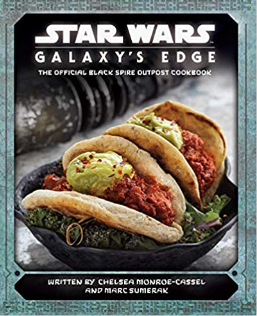 Unfortunately for the next program’s avid fans, the ‘Supernatural” TV show is concluding its run after 15 years but the food will always be with us in Supernatural: The Official Cookbook: Burgers, Pies, and Other Bites from the Road (Science Fiction Fantasy) by Julie Tremaine. The book features “…some of the brothers’ favorite dishes, such as Dean’s breakfast Pigs ‘N A Poke, cheeseburger and fries, angel food cake, Sam’s salads—and, of course, pie!” There are other recipes inspired by the program and its characters as well.

We mustn’t forget the liquid refreshments and for that I’ll turn to The Geeky Bartender Drinks: Real-Life Recipes for Fantasy Cocktails (Geeky Chef) by Cassandra Reeder. The collection promises “…this leveled-up cocktail book will soon have you unlocking achievements behind the bar, no matter if you’re mixing drinks for yourself, a friend, or even a viewing party. And for all you nondrinkers, don’t fret: this book has a nonalcoholic chapter along with plenty of imaginative tricks for making drinks alcohol-free. So, if you love Game of Thrones, Legend of Zelda, Doctor Who, World of Warcraft, Final Fantasy, Star Wars, or any other inspiring work of nerd content, get ready to restore your mana.” It’s thirsty work but someone has to do it.

I’ll conclude with a 2018 offering The Geek’s Cookbook: Easy Recipes Inspired by Pokémon, Harry Potter, Star Wars, and More! by French chef Liguori Lecomte. Not that those of us who love scifi, fantasy, games, comics and the like are necessarily geeks but it’s fun to cook and eat dishes inspired by pursuits we love. The book offers 30 recipes including delights such as “…the supreme taste of the Matrix Burger or the Sauron Tarts, succumb to the Dagobah Marsh in Herb Crust or the Karadoc Crunch. Top it all off with some Minecraft Cookies or Meringue Pokéball…”

But wait! Added for our readers here at AMAZING STORIES are two more books: 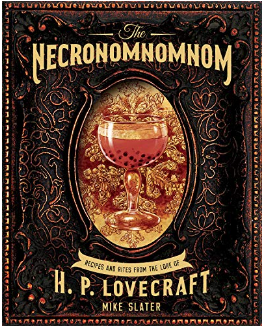 The Necronomnomnom: Recipes and Rites from the Lore of H. P. Lovecraft by Mike Slater, released in 2019. Here’s a portion of the blurb: “Reading about the slime- covered, non- Euclidean ruins of the sunken city of R’lyeh or the squamous, tentacled deity who slumbers there would make anyone hungry. Starting with the puns and working from there, authors Mike Slater and Thomas Roache have summoned forth 50 funny, bizarre, and horrible dishes such as: The Deep Fried Deep One, Nog Sothoth,  Cthus-Koos…Like H. P. Lovecraft’s Necronomicon, the legendary and forbidden book of the dead that is “alien to all sane and balanced readers,” this cookbook contains many dark (but still delicious) secrets within its pages. The book comes infested with sanity- melting and mouth- watering illustrations, as well as annotations full of crazed discoveries and desperate warnings about the recipes that brave readers will undertake.”

And one more, on a lighter note: Gastronogeek: 42 Recipes from Your Favorite Imaginary Worlds by Thibaud Villanova and Maxime Léonard. The description: “From Back to the Future to Superman, this cookbook combines gastronomy and geek culture with playful recipes from fifteen fandoms — perfect for anyone looking to bring more magic and imagination into the kitchen. 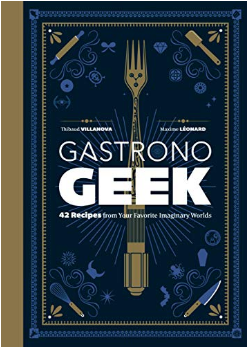 Presenting pop culture delicacies for both casual and devoted fans, this cookbook includes forty-two recipes to conjure up unbelievable three-course menus influenced by fifteen fandoms from science fiction, fantasy, manga, horror, and comics. Become a gourmet geek with this mouthwatering menu: A delicate “Impossible Soufflé” from Doctor Who, “Sanji’s Special Pork Steaks” from One Piece, the aptly named “Transylvanian Beef” from Dracula with roast beef, onions, and saffron potatoes, a hearty “Vegetables of Yesteryear Pie” from The Lord of the Rings

Specialty sweets and desserts: “Martha Kent’s Apricot and Almond Tart,” “McFly Cheesecake,” or the “Eye of Sauron Sabayon”, and more!”

What more could we need for a holiday feast and some binge watching than the smorgasbord offered by these books? Happy Holidays!

Back in March, the studio Animation Do released a trailer for a nameless anime about a group of hunky male swimmers.  The trailer caught fire on the internet, with folks all over begging for an anime to follow.  In July of this year that anime, based on the light novel High Speed! by Koji Oji, […]

A wealth of Graeme Cameron, Askance and more today in the fan library!